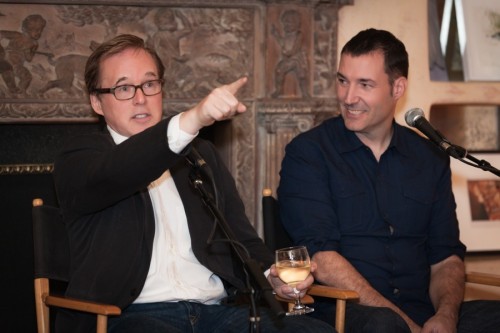 Directors and CalArts alumni Brad Bird (Mission Impossible: Ghost Protocol) and Mark Andrews (Brave) were the featured speakers at the most recent FoCA (Friends of CalArts) salon, held on Jan. 29 at the home of FoCA co-chair Edie Baskin Bronson and her husband Richard “Skip” Bronson.

Nearly 60 guests—CalArts alumni, students, parents and arts supporters—attended the event, in which Bird (Film/Video BFA 76) and Andrews (Film/Video BFA 93) discussed the current state of the film industry and their post-CalArts lives. The conversation was guided by CalArts Provost Jeannene Przyblyski.

From a Los Angeles Magazine recap of the FoCA salon:

…With the Oscars coming up, Bird joked about what happens when non-celeb types (like him) get up to the mic once they win. “The minute you get up there they blink a light saying ‘Wrap It Up.’ If you keep going, a guy gets up and starts to do this in front of the monitor,” at this Bird stood up and waved his body like a reed in the wind. Andrews discussed how he started out, “I wanted to be a marine. CalArts accepted me to the chagrin of my marine recruiter. I just wanted to draw.” Students, others guests (like John Musker, Little Mermaid director) asked questions and Bird closed with his hope for the industry, “I hope money becomes adventurous again. Gut instinct is undervalued and I hope it returns.”

We posted several photos from the event in the photo gallery, above.