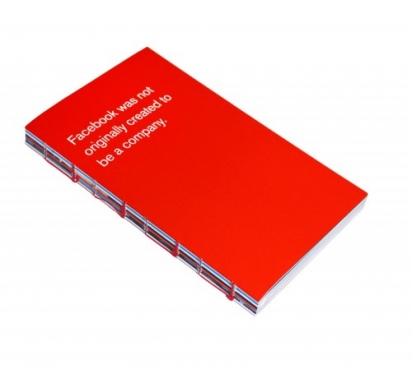 Tim Belonax is a graphic artist whose style communicates on that commanding plane where text and linearity become an aesthetic all their own. He’s a former student of the MFA Graphic Design program at CalArts (Art 11) and now works for the internal design team at Facebook. His past work includes designs for Chronicle Books, and “A Machine For Typographic Generation” for The Thing Quarterly (in photo gallery), an all in one stencil that can make any letter or number in the Latin alphabet.

24700 spoke with Belonax about the parallels between Facebook and CalArts, a chance run-in with Oprah Winfrey, and the California highway system as a place for contemplative thought.

24700: What is your position or title at Facebook? What do you do day-to-day?

I’m a Communication Designer at Facebook. I work on a multidisciplinary team of engineers, filmmakers, and web designers, regarding a variety of projects that influence the internal culture of the company and its brand. Right now I’m working on a large branding initiative that will be outward-facing (seen by people who use Facebook) along with a few projects for internal culture.

During the summer of 2011 my friend John Bielenberg forwarded me a tweet from another friend, Ben Barry. Ben works at Facebook. He needed help designing f8, Facebook’s Developer Conference. I’d visited their campus a few months prior, so I was aware of its unique culture as well as the possibility of doing interesting work. I started freelancing at their office in Palo Alto in July of 2011. While I was freelancing, I made a good impression on a few people and they created a job for me. It took me 3-4 weeks to decide. What put me over the top was when I met Oprah.

A lot of crazy things happen at Facebook. I worked on a project in 2007 called, “Buy A Meter.” The title of that was, “Oprah Has One.” The concept of the piece was that these individuals in rural Alabama lacked clean drinking water because they couldn’t afford a water meter to connect to the municipal pipeline. The day before I had to drive back to CalArts, Oprah came to visit Facebook and I presented her with our newsprinted brochure. She was pleasantly surprised.

24700: Are there any parallels between CalArts and working for Facebook? How are the environments similar/dissimilar?

There a more surprising similarities between Facebook and CalArts than I would have expected. Of course there are more differences than similarities. Facebook is a publicly traded technology company with different goals and values than a private art college. The notion of anything resembling “CalArts time” couldn’t exist at Facebook. Things happen very fast here.

24700: Looking at your work, three things immediately come to mind: Communist propaganda art, Russian abstract work such as Kasimir Malevich’s, and highly advanced mathematics. Put into words, “Bold,” “Didactic” and “Systematic.” Do these parallels resonate with you?

I’d agree with those influences, but I can’t say they are focuses. I try to be an information sponge and address design from a process-driven perspective. The systematic approach is definitely a method I use to break from my preconceived ideas. One of the biggest influences on my design career was an introduction to Edward De Bono’s work. De Bono created “lateral thinking” and championed the idea that the way that we think can be trained and improved the same way that we might train for a marathon or a math test. I even used his book “Thinking Course” in one of my projects at CalArts.

24700: Is there anything you learned during your time at CalArts that still comes up in your work today?

I think Lorraine Wild’s Design History course still has an impact on me in myriad ways. Beyond her class (which was amazing), she’d often share an anecdote from her drive to school that day. I often think about my car or bus rides to work in the morning as a space for creative contemplation instead of worrying about traffic or answering email. It’s actually a rather calming habit…as long as traffic isn’t too bad.