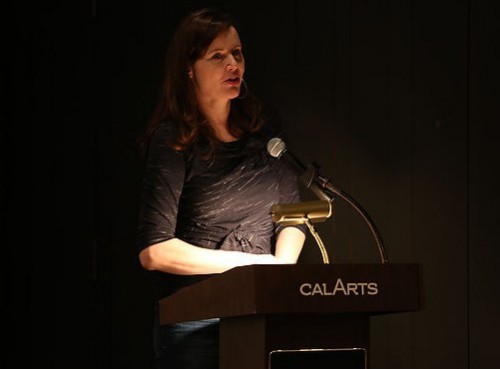 Geena Davis urges artists to ‘move beyond the token female’ in their projects. | Photo: Steve Gunther

Women are still so woefully underrepresented in films and television shows that—at the current rate—it would take nearly 700 years(!) to achieve parity.

That was just one of the jaw-dropping facts that Academy Award-winning actor and activist Geena Davis told an audience of CalArts students and faculty who gathered in the Bijou Theater yesterday (Feb. 19) to hear her speak about the state of gender equality, particularly in film and television writing and production, and what artists can do to change the status quo.

Davis founded the nonprofit organization, the Geena Davis Institute on Gender in Media, in 2004 after watching children’s programming with her young daughter and noticing the lack of female characters in films and shows for children 11 years and younger. She found that “particularly in G-rated movies, there was so often just one female character.

“There are few opportunities to inspire and relate to female characters,” Davis said, also noting that the inequality permeates nearly every sector of American society. Only 19 percent of all law partners are women; in Congress, women make up 17 percent of the members; and behind the scenes in film and television, women account for only 16 percent of the directors, producers and writers.

As a passionate and outspoken advocate for gender equality, Davis’s Institute and its programming arm, See Jane, are hoping to spur the change of female portrayals and gender stereotypes in children’s media and entertainment. “The male to female ratio [in media] hasn’t changed since 1946,” she said.

The Institute commissions research on gender equality, and then meets with content creators to show data and findings. Davis hopes that in heightening awareness, the industry will be able to create rich, interesting female characters. “[We hope to] change the image of the future.”

Davis is also working as a consultant with Walt Disney Imagineering, reviewing gender issues at all the affiliated parks and resorts.

Though it’s a policy of her Institute not to point out particular shows or characters as either positive or negative examples, Davis did single out a director who she felt was doing a consistently good job balancing gender roles in his films: Jim Cameron.

“Ripley in Aliens was supposed to be a male character, and they just changed it to a female one. I think he’s doing a great job, and nobody is feeling like, ‘He has too many female characters…he just does it and creates interesting female characters and gets it done.”

It wasn’t surprising to learn that in her extensive filmography, the one role that Davis said has had the most impact on her life was Thelma and Louise, with its two strong female leads. We posted the trailer, below.