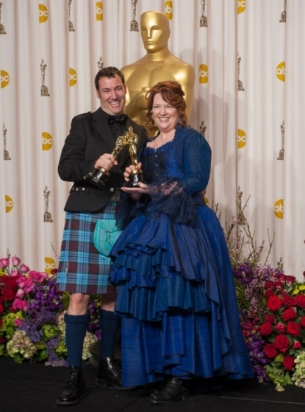 The Oscar-winning film follows Scottish princess Merida, determined to follow her own life’s path, and must undo a curse to do so.

Chapman noted in her televised acceptance speech that the film’s story was inspired by her “brave, strong daughter Emma.” Co-director Andrews truly embodied the spirit of the Scottish Highlands by donning a kilt to the awards. The DunBroch Tartan was created by Disney/Pixar specifically for the film.

Backstage in the press room, the directors were asked about Brave‘s long journey to the screen and the creative process along the way.

Chapman: The film took actually eight years from beginning to end, and I can talk about the beginning of it. Mark can talk about the end of it. But it took a lot. I was a year in a room all by myself writing and coming up with the basic story plot, but then you start bringing on the people who start looking at the look of the picture and help with the story, and you keep working and reworking the story…

Andrews: So once everything’s kind of built you put it all together, and you start shooting it, and you’ve got your voice talent and then your other actors, your animators, putting together these performances, and, I mean, it’s this huge organic process. And it’s a fragile, delicate process on every step of the way. And there’s a lot of plates to spin, and by the end if you just stick with it and you’re passionate about it, hopefully, you have something that’s really special. And I think in Brave‘s case I think we managed to pull that off.

We posted a photo gallery, above, of all the CalArts’ alumni who were nominated for Oscars this year.