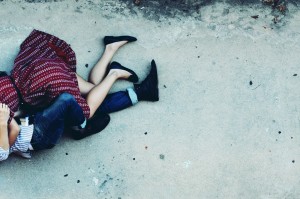 In a dream-like story that straddles the line between reality and the imagined, Daniel (Michael Aurelio [Theater BFA 13]) returns home from an unexplained absence, forcing his family to forge new relationships with the world and each other. As he’s haunted by a lost love, Daniel must fight to confront what he fears most.

The production is being staged in Downtown Los Angeles to help showcase the work of CalArts students to the larger community.

Travis Preston, dean of the CalArts School of Theater, said there were two main reasons for presenting the work in LA: “This forum gives our emerging artists broader exposure in an expanding professional environment that is vital to their career development while also giving Los Angeles access to an extraordinary community of gifted young artists who will help define the cultural landscape of the future.”

We posted a gallery of production images, above, and a promotional trailer, below.