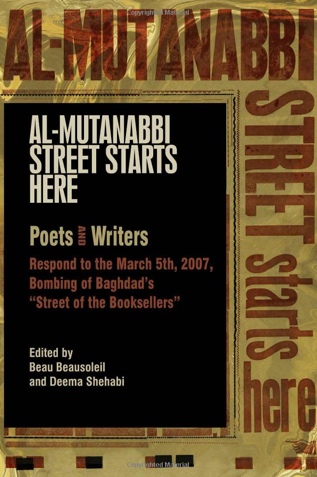 The New Roads School in Santa Monica hosts a poetry reading tomorrow night (March 5) to remember the victims of the 2007 Al-Mutanabbi Street Bombing in Baghdad. On March 5 of that year, a car bomb was detonated in an area that for centuries housed Baghdad’s intellectual and literary community. Thirty people were killed and more than 100 injured in the blast that also decimated bookstores, outdoor stalls, print shops and cafes.

The commemorative poetry reading will feature both New Roads students and established writers, including Tania Baban Jordan Elgraby, Majid Naficy, Jim Natal and CalArts advisor Janet Sternburg—all of whom are contributors to the book Al-Mutanabbi Street Starts Here: Poets and Writers Respond to the March 5th, 2007, Bombing of Baghdad’s ‘Street of the Booksellers.’ (Sternburg’s latest work is a “re-view” of the film Holy Motors by Léos Carax, recently published in The Times Quotidian, an arts and culture journal.)

The anthology, edited by Beau Beausoleil and Deema Shehabi and published by PM Press in August, is a collection of works written in response to the car bombing. (School of Critical Studies faculty member Jen Hofer is also an anthology contributor.)

On view in conjunction with the reading is a selection of letterpress broadsides from the Al-Mutanabbi Street Starts Here touring show, which were created and crafted by a number of artists, poets and writers. The full exhibition features 130 broadsides to remember each of the Al-Mutanabbi bombing victims.

The New Roads School reading is free and open to the public. Other events are being held in Washington, D.C., Boston, San Francisco and in the U.K. to commemorate the anniversary of the bombing.