On March 8, It Came From the ____! A Choose-Your-Own-Play, written and produced by CalArts alumna Kathleen Reinbold (Theater MFA 12), opens at the Son of Semele Theater in Silver Lake. The production also features other CalArts alumni both onstage and backstage. 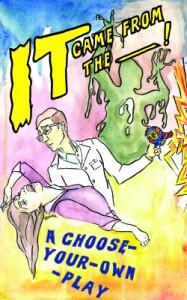 It Came From the ____! is a production wherein the audience gets the chance to choose what the characters will do, directly influencing the action onstage. The comedy follows internationally renowned Dr. Ken Starr (Paul Turbiak [Theater MFA 08]) as he attempts to stop a mysterious creature responsible for the deaths of several townspeople. Along with the help of colorful sidekicks, he resolves to find the creature through the power of science.

“It’s a really fun show, and it’s an entirely new way of engaging the audience in theater,” says Reinbold. There are eight possible story configurations and only seven performances, so one can even see the show more than once and still be surprised by the ending.

The play received a workshop session and performance at CalArts last year under the direction of Ella Martin, artistic director of Theatre Mab Town Hall (TMTH). TMTH is producing this year’s production as part of its mission to “develop new works and produce traditional text in unpredictable forms.”

We posted the It Came From the ____! trailer from the CalArts School of Theater workshop, above.