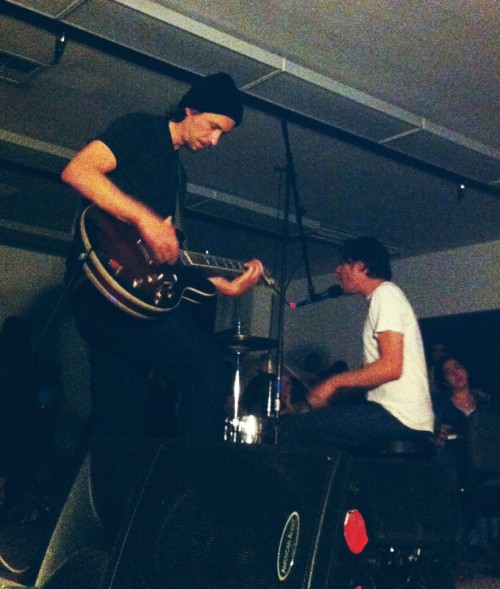 Update 3/7: The event was curated by Sarah Gottesdiener (Art MFA 13).

No Age, an LA-based, two-person noise punk band, made a surprise visit to CalArts on Monday night (March 4). As part of a lecture by graphic designer and visiting faculty member Brian Roettinger (Art BFA 04), the group performed an intimate set in the F200 classroom.

Roettinger, who is also a musician and owns the vinyl-only record label Hand Held Heart, spoke about the graphic design projects on which he has collaborated with the band. In 2009, he was nominated for a Grammy for his design of No Age’s Nouns album packaging. In fact, Roettinger has designed the packaging for a majority of the band’s records—most recently No Age’s Collage Culture, a 12-inch released in February 2012. The record is a soundtrack to readings from the book Collage Culture by Aaron Rose and Mandy Kahn.

It’s not the first time (nor probably the last) that the F200 classroom has turned into a pop-up concert venue. That same classroom featured a performance by the Henry Rollins-fronted hardcore punk outfit Black Flag on Nov. 11, 1982 (see the photo below).

No Age knew about that legendary concert, which inspired them to pay tribute to Black Flag and play the room themselves. 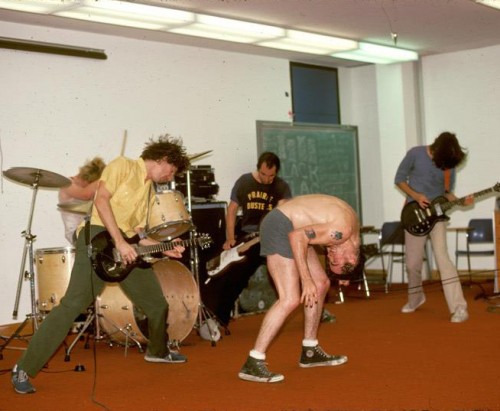 Watch a music video for No Age’s Fever Dreaming from their 2010 release, Everything In Between, below: