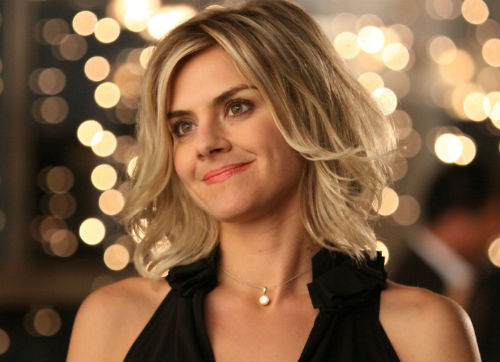 Along with fellow CalArts’ School of Theater alumnae Alison Brie (Community) and Cecily Strong (Saturday Night Live) Eliza Coupe is making a splash in the world of comedy. She stars in the recently released romantic comedy Shanghai Calling and can also be seen on the ABC ensemble sitcom Happy Endings.

During a recent phone interview, we talked to Coupe (Theater BFA 06) about her work on Shanghai Calling, her acting career and advice for the graduating class of actors who are heading east for the New York Showcase on Monday.

Shanghai Calling was shot in six weeks in Shanghai and required Coupe’s expat character to be fluent in Mandarin. Coupe said she had about two weeks to immerse herself in the pinyin (phonetic) system before leaving, practicing two hours each day with a teacher here in LA.

“I think it’s hilarious, but when I got the call about this film, I was actually coming back from a French lesson,” she said. “I thought learning a language is like learning a language…no it’s not. Learning Chinese was the hardest thing I’ve ever had to do. I’m not a mathematical person, and Mandarin is incredibly mathematical.”

Coupe said the learning was an important part of the process. “As an actor, it was important to me to actually act and not just mimic, so I needed to know what [my character] was saying.” The hard work paid off, with the film and Coupe getting good notices from Variety and the Los Angeles Times, among others.

While her comedy career’s now in high gear, Coupe is the first to admit that the road wasn’t easy. “I took a class at the Groundlings and was not asked to move forward,” she said. “In their defense, I was not in a place where I could actually take in what I was learning. I needed to grow up a little bit…I wasn’t ready for it, and it showed.”

She retreated to her family’s New Hampshire home before making the move to New York, where she worked as a waitress and bathroom attendant in Times Square. In New York, Coupe said that she’d buy one ticket to either the Upright Citizen’s Brigade or the People’s Improv Theater and watch the sets from opening to last call, breaking down what the players were doing.

“I wanted to do a one-person show so badly,” she said. She found a one-person workshop flier taught by Kirsten Ames, who eventually became her manager. Under Ames’ tutelage, Coupe and her five-character, one-person show—The Patriots—eventually made it to the 2006 Comedy Festival in Aspen, where she won the breakthrough performance award.

She also credits CalArts—especially School of Theater Dean Travis Preston’s Studio Class and “Mary Lou Rosato in general”—for preparing her for the actor’s world. She still remembers her favorite production Twelfth Night as “one of the most wonderful experiences at CalArts.

“Doing more dramatic and avant-garde theater definitely deepened my understanding of comedy,” she said. “Comedy can only be good if it’s rooted in drama.”

For the actors heading to New York, she says not to get too discouraged if they don’t get contacted after showcase. Coupe remembered that she didn’t get one call. “You keep having showcases every single year in your career. It’s just not necessarily with a school. You’re just doing it every audition.”

She also advises actors to not be afraid to take risks and test themselves: “You’ll eventually find what you’re good at and refine those skills. Eventually taking that risk is going to pay off big time.”

Happy Endings returns to ABC on March 29 at 8 pm with back-to-back episodes. Shanghai Calling is now playing on demand and on digital download.

Just for fun, we posted a Funny or Die video—“Frenemies”—that features Coupe and Lauryn Kahn. Coupe’s a big fan of testing new material out on the web and encourages others to do the same. “Workshop and do fun stuff and throw stuff out there,” she advised. “It’s going to get you recognized.”