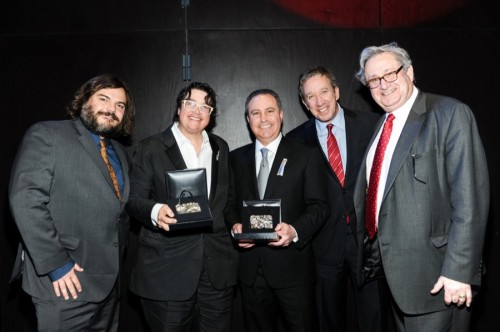 In keeping with CalArts’ unfettered spirit, cooing and comedy abounded, but the evening’s highlight was the presentation of the 2013 REDCAT Awards. The recipients this year were The Walt Disney Company—instrumental in founding and supporting the influential school and its REDCAT space—and celebrated photographer Catherine Opie, who received her MFA from CalArts in 1988. The event, held at REDCAT, also marked the 10th anniversary of the critically acclaimed multidisciplinary theater and gallery located in the Walt Disney Concert Hall complex.

“This is not just 10 years, but a decade” said Opie, after receiving her award from painter and CalArts alumnus Lari Pittman (Art MFA 76, BFA 74). “A decade means that REDCAT has proven itself, it’s continued to inspire us, and it’s continued to bring the community together. A decade is a marker of what is going to come in the next 10 years.”

Allen, who was named a “Disney Legend” in 1999 for his contributions to the company, presented the REDCAT Award to Alan Bergman, president of The Walt Disney Studios and a CalArts trustee. “The important story tonight is about the extraordinary relationship between The Walt Disney Company and CalArts and, of course, this great place—REDCAT, the artistic laboratory next to Disney Hall,” Allen said. “What a cool space.”

Bergman praised REDCAT and CalArts for carrying through on Walt Disney’s vision to create an institution that would produce new forms and expression through a community of the arts. “On REDCAT’s 10th anniversary, it’s so exciting to see how this theater and arts center has emerged as a bold and logical expression of the CalArts mission,” Bergman said. “Disney is thrilled to be a partner in helping CalArts develop, to nurture the talents of today and tomorrow, and to continue to support REDCAT and its desire to showcase a wide range of dynamic programs.”

Because of the connection that CalArts has with Disney and Opie, the evening felt like a reunion of old friends, especially when performer Cynthia Hopkins encouraged the audience to contribute a chorus of bird calls to one of her songs. Said CalArts President Steven D. Lavine: “CalArts is a kind of extended family that no one ever gets to leave.” Confirming that statement, Black, serving as master of ceremonies, noted that he had “married into the CalArts family,” since his wife, Tanya Haden (Film/Video BFA 98), is a graduate of the school’s character animation program and since his father-in-law, legendary bassist Charlie Haden, established the Jazz Program at CalArts. “So I know a thing or two about what goes on up there in Valencia and down here at REDCAT.”

In accepting her award, Opie said that memories of her time at CalArts had been streaming back to her throughout the evening. “All of a sudden, I’d turn a corner and hear a cellist playing, and so I’d sit down and I’d listen. I’d turn another corner and I’d see an animator pushing a desk across the floor, trying to figure out how to animate it. For those of us who were able to attend such an amazing institution as CalArts, all of these things are forever embedded in our DNA and are part of who we are as artists.”