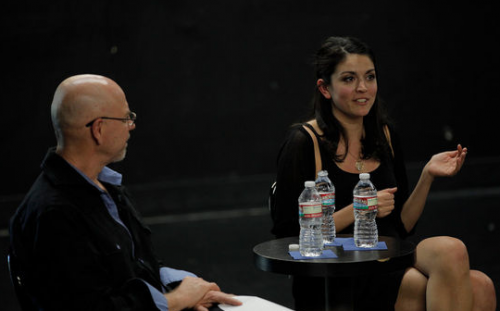 Alum Cecily Strong (pictured with Dean Travis Preston) talked to students in the School of Theater earlier this month.

On March 15, Saturday Night Live’s Cecily Strong returned to CalArts to talk to School of Theater students about the career path that led her from Valencia to the hallowed halls of 30 Rockefeller Plaza in NYC.

During the candid Q&A session in the Coffeehouse Theater, the SNL standout and CalArts acting alum (BFA 06) answered questions—often wittily—about the industry, the hectic schedule of a weekly sketch comedy show and some of her favorite moments from her first season.

Strong said that it was faculty member Lew Palter who encouraged her to try out for the improv/sketch comedy troupe The Groundlings. She balked at the idea at first, self-deprecatingly telling the Coffeehouse audience, “No, I’m a serious actor!” (While at CalArts, she had roles in As You Like It and September 11, 2001—a CalArts Center for New Performance production that also traveled to Paris.)

But after moving back home to Chicago (“where Mom could buy me groceries if I needed to eat”), Strong began taking classes at Second City and iO Chicago. The two venerable comedy institutions boast a number of greats in their alumni rosters—among them Bill Murray, Jane Lynch, Mike Myers, Amy Poehler, Tina Fey and Stephen Colbert.

Each year, SNL holds tryouts at iO Chicago, and aspiring cast members are asked to perform several characters in under five minutes. Strong said that for her audition, she focused on her strongest characters and tried to keep things short. The tryout lasted about three minutes. After a few callbacks, Strong got the answer many hopefuls only dream of: She was asked to move to New York (in less than a week) to begin work on the longest-running sketch show in television history.

She broke down her weekly SNL schedule for the students: Mondays are meeting days, Tuesdays are heavy writing days, followed by table reads on Wednesdays. Thursdays and Fridays are reserved for rehearsals, with the final dress rehearsal at 8 pm on Saturday. In between rehearsals, the show’s popular fake commercials are also often filmed on Fridays. Strong also noted that since SNL is a live show, script edits and cutting skits can happen at the last minute—even during the East Coast broadcast.

When quizzed by students about her favorite show moments and characters to play on the show, she named the ex-porn stars (with Vanessa Bayer) and, of course, her breakout SNL character, “Girl You Wish You Hadn’t Started a Conversation With at a Party.” Strong admitted to being a bit star-struck when it came to working with host Christoph Waltz and meeting the Three Amigos: Steve Martin, Martin Short and Chevy Chase during a recent show.

The students heard practical advice from Strong when she was asked how to deal with criticism and rejection—two things that are inherent in the industry. “There’s so many people that love to hate… I ignore the blogs and critics.” When facing rejection, she urged the students to keep challenging themselves: “Do things that scare you. If you feel discouraged, don’t be afraid to try things in a different way.”

Strong, who was in LA during SNL’s hiatus, also talked about current industry trends, noting that after the film Bridesmaids, women in comedy and low-budget comedies became hot commodities in Hollywood. Stories with an “emotional base” with imperfect yet relatable characters are also in demand, she added.

In one of the more memorable moments during the visit, a student asked Strong about the most important thing to remember when graduating from CalArts. The comedian had a simple message: “Stay kind, stay joyful and stay true to yourself and your friends.”