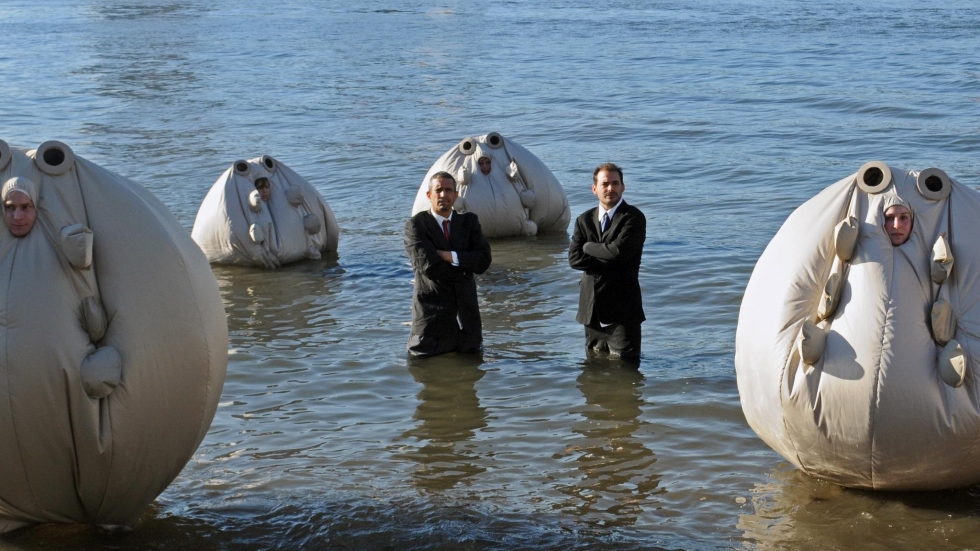 Still from the film, ‘The Yes Men Fix the World’ | Photo: Facebook

The Yes Men are a group of activists—led by Jacques Servin (Andy Bichlbaum) and Igor Vamos with collaborators around the world—who pull hoaxes, stunts and leverage media to tell stories they deem important. Servin, one of the group’s founders, held a Yes Lab workshop on the subject of “Tactical Media Strategies” at CalArts earlier this month, a few days ahead of the performance troupe’s presentation at TedxCalArts on March 9.

Often, their stunts are shocking and over-the-top—but humorous. They have a penchant for impersonating executives from large corporations to prove a point, as when Servin impersonated a Dow Chemical Company spokesperson who appeared to apologize for the Bhopal (India) disaster on the 20th anniversary of the deadly chemical accident.

The CalArts workshop focused on teaching attendees how to work with the media to spread awareness about various social issues and causes. “Activists often think media is the enemy, but it could be an effective tool for getting your message out,” Servin said.

Servin enumerated the characteristics of successful tactical media campaigns, including “creative copying”—and even copyright infringement, which is one of The Yes Men’s trademarks. He also stressed the importance of humor. The Yes Men try to make their stunts and hoaxes awkward for everyone. Nothing is too serious. “It furthers the story, and there’s a better chance that the media will pick up the story if it’s funny.”

Servin also emphasized the role that artists can have in furthering movements: “Between the issue and a movement, communication has to happen and artists have a place in that.”