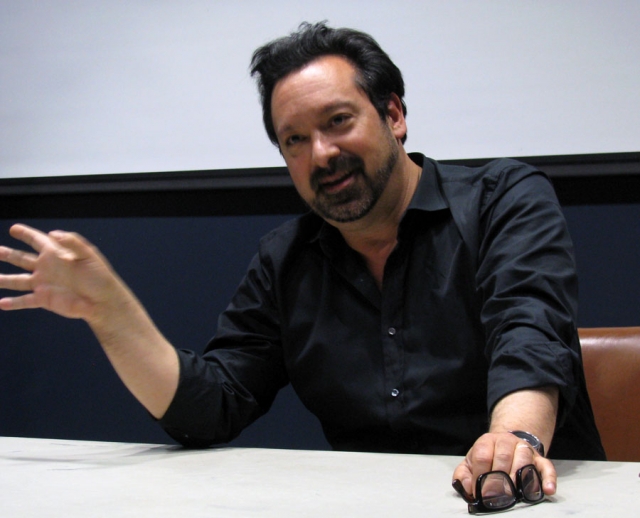 James Mangold most recently served as executive producer of CBS-TV’s Vegas and directed the upcoming film ‘The Wolverine’ | Image: CalArts

Writer, director and producer James Mangold, a CalArts alum, has been an occasional guest lecturer in the Film Directing Program this semester. He last came to campus on March 21 for the program’s Guest Artist Workshop, screening several scenes from his film Walk the Line—which he co-wrote and directed—discussing with students shot choices, angles, editing decisions and dialogue.

“Music biopics are on the edge of cliché,” Mangold (Film/Video BFA 85) told the filmmakers in attendance. “What separates you from cliché? How good you do it.”

He has the credentials to back up the claim. Walk the Line (2005) is one of the more critically acclaimed biopics in recent memory, starring Joaquin Phoenix and Reese Witherspoon as Johnny Cash and June Carter Cash. Among its awards, the film earned five Oscar nominations with an eventual win by Witherspoon.

At the beginning of the workshop, Mangold acknowledged the different approaches to filmmaking. “Not everyone has the same process,” Mangold said, “but I figured out what works for me.” He explained how he merges what he learned about narrative from Alexander Mackendrick, the founding dean of CalArts’ School of Film/Video, with the social science he studied in grad school at Columbia University (where he earned an MFA in Film).

Mangold discussed philosopher Paul Grice’s communications maxims—tenets such as “don’t lie,” “don’t share information without evidence,” or “do make contributions to the conversation on a need-to-know basis.” He talked about applying those aphorisms to his filmmaking to convey messages to his viewers. “Communication has to be cooperative,” he said. “Every bad movie I saw broke every rule of basic conversation.”

But he also acknowledged that complying with all of Grice’s axioms has a downside, too: “If you follow all these things perfectly, you’re boring.” Mangold added that filmmakers need to figure out the balance of showing, implying and challenging audiences.

One caveat he had for the younger filmmakers was to not get distracted by the available technology to the point that they “forget about communications and telling the story.” It’s easier to pick the right tools for the film or the shot after your decide what to do with it, he said.

It was a refreshing perspective from the director whose next film is one of the more highly anticipated summer big-budget films: The Wolverine with Hugh Jackman is due out July 26.