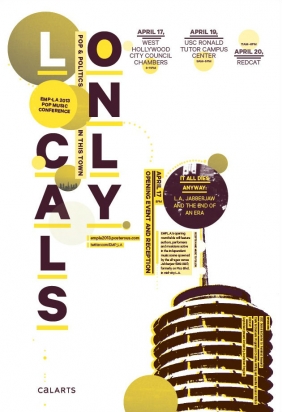 CalArts’ School of Critical Studies and REDCAT are co-sponsoring this year’s EMP (Experience Music Project) Pop Music Conference in Los Angeles, along with the USC Dornsife Center for Feminist Research and the Loyola Marymount University Journalism Program. This year’s conference, Locals Only: Pop and Politics in This Town, runs from April 17 to the 20th and will be held at the West Hollywood City Council Chambers, REDCAT and USC.

The conference’s title references graffiti scrawls at certain Los Angeles beaches to ward off “outsiders” from taking over surfing territory and The Go-Go’s This Town. Subverting the language, the conference instead pays tribute to the importance of location, neighborhood and community in defining music in Southern California. It also seeks to underscore the myriad ways in which local communities have responded to the influence of LA’s double-edged glamour, its pervasive culture industry and gendered star systems.

On Saturday (April 20), REDCAT is EMP-LA’s main venue, hosting several panels and discussions, including one on the dance form krump (invented in South Los Angeles) and rapper Kendrick Lamar’s relationship to the geographies he claims. A complete schedule of the conference can be found here.

Launched in Seattle in 2002, the EMP Pop Conference brings together academics, critics, performers, and dedicated fans in a rare common discussion of pop music. This year, five different gatherings in Seattle, Cleveland, Los Angeles, New Orleans and New York will take place over the course of a single weekend to broaden the understanding of the integral role that music plays in the human experience.