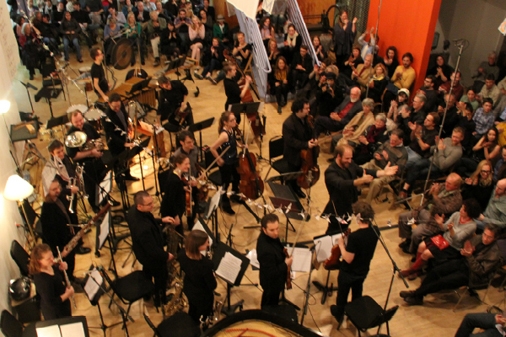 Tonight (April 17) at 8:30 pm at REDCAT, critically acclaimed modern music collective wild Up presents a concert in conjunction with the Los Angeles Philharmonic’s Brooklyn Festival. The ensemble will play a wide range of music—from a piece by revered avant garde composer Edgar Varèse to a new video work by Brooklyn composer Jacob Cooper to a cover by rock behemoths They Might Be Giants—in a concert that connects the new music scenes of the two coasts.

We’re looking at the music being made by our friends in Brooklyn. The group is interested in where this eclectic style of music making fits in the canon, and where it mixes with work made on the West Coast. From hocket [a compositional technique of alternating between multiple parts or voices] roots in Bach and Varèse, through the influence of [American theatrical composer] Sondheim and the pop idiom, to experimentalism, noise, and multimedia—We’ll will be exploring these composers’ complex simplicity.

Featuring more than 20 players, the ensemble originated in Brooklyn in 2010. Most of its members are CalArts alumni.

For more information about the LA Phil’s Brooklyn Festival, visit their site.

wild Up: Bridge to Palm