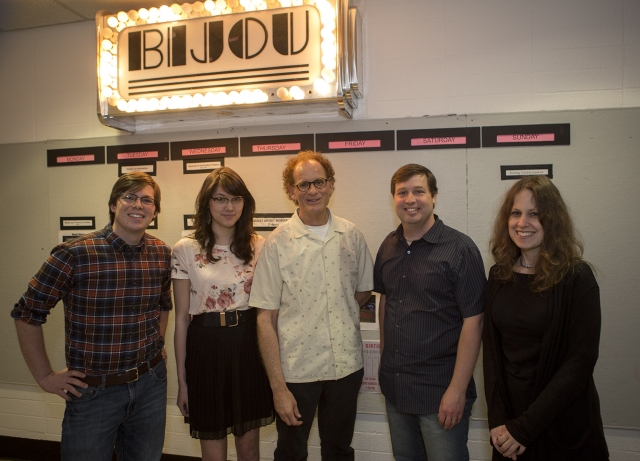 CalArts alumnus Joe Lanzisero (Film/Video BFA 79) returned to campus earlier this spring to talk to students about his many years at Walt Disney Imagineering (WDI)—the design and development division of Walt Disney Parks and Resorts—and to offer them valuable career advice. Lanzisero, a creative development executive at WDI, said that the lessons he learned about story development while studying animation at CalArts have informed all of his work designing Disney theme park attractions and other projects.

“Everything we do is about telling stories,” Lanzisero told a group of about 60 students, faculty, and other members of the CalArts community.

Lanzisero, who is in charge of the creative side of Hong Kong Disneyland and Disney’s cruise ship operation, showed students the work of early Imagineering artists and designers, who each had unique creative skills. He then described how he had made the leap from an early career as a Disney animator to creating films for Epcot and Disneyland to a job with Imagineering designing attractions for Disney theme parks.

When he was asked in the late 1990s to develop a miniature golf course called Winter Summerland at Walt Disney World, instead of relying on the typical miniature golf features such as windmills or castles, Lanzisero gave the course a unique narrative.

“The story is that Santa is flying back to the North Pole after delivering toys for Christmas and decides to vacation in Florida,” explained Lanzisero. So each hole on the course reflects that story. “We have a miniature Winnebago for the elves, and in another part, the elves have buried Santa in the sand.”

During the talk, it was announced that several CalArts animation students will be invited to Imagineering in May to meet with designers, who will review their portfolios. Lanzisero, who was accompanied by fellow Imagineer Jim Clark (Writing MFA 00), said that potential Imagineers not only need strong portfolios demonstrating their drawing skills, but they also need to be able to communicate their ideas.

“I never saw myself as a great draftsperson, but I had a sense that I knew what I was trying to say,” said Lanzisero, whose CalArts animation classmates included Brad Bird (director of The Incredibles and Ratatouille), John Lasseter (director of Toy Story and Cars and chief creative officer at Walt Disney and Pixar Animation Studios), and John Musker (co-director of The Little Mermaid and Aladdin). “Being able to communicate your ideas standing in front of a group is an important skill. Have confidence to get up in front of people, know what you like, and be able to tell them.”