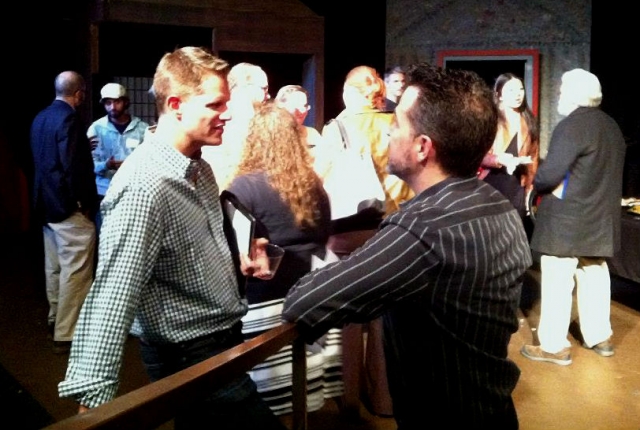 Is it possible to survive in the LA theater world? According to 10 CalArts theater alumni who have carved out successful careers in the theater through talent, determination and ingenuity, the answer is a resounding, “yes.”

The Careers in Los Angeles Live Theater event on April 24 at Theatre/Theater in Los Angeles–a panel discussion organized by the CalArts Entertainment Group in the Office of Alumni Relations–seemed, at times, like a survival boot camp for the stage, as panelists offered tips to an audience of about 75 of their peers, including many CalArts students and alumni. The panelists included actors, directors and producers, all of whom agreed that the keys to success are perseverance and professional preparation.

“I had an agent, but an agent is only a tool,” said Celeste Den (Acting MFA 04), a performer whose credits include the recent international tour of David Henry Hwang’s Chinglish. “No one will work harder for you than yourself.”

Actor Adam Hunter (Acting BFA 07), who has received LA Weekly and Los Angeles Drama Critics Circle awards for featured performance, said that he has been able to survive occasional lean times using the carpentry skills that he learned partly at CalArts. He suggested that acting students take advantage of theater production courses that teach technical crafts like lighting and scenic design, so that between acting gigs, you can still stay active in theater. “As a technician, you can get work in the theater and you won’t have to wait tables,” he said.

On the direction and production sides of the theater business, panelists cited collaboration as a way to keep a company afloat. David Mack (Acting MFA 08), managing director of the Watts Village Theater Company often co-produces plays with other companies so that expenses can be shared; he has joined forces with as many as four other companies to produce a single show. “I enjoy writing grants and making a budget, and I enjoy asking people for money. That may sound weird, but it’s key to making a company survive,” he said.

Even when Pasadena’s Theater @ Boston Court received a $5.5 million gift to build a new theater, Co-Artistic Director Jessica Kubzansky (Theater Directing MFA 94) said that her struggles did not disappear overnight. “I have to work all the time to survive,” said Kubzansky. “Just because I have a beautiful building doesn’t mean that I have a beautiful salary.” She supplements her Boston Court salary by directing plays around the U.S.–which also satisfies her artistic needs.

Most of the panelists said that their CalArts training and exposure to numerous non-theater disciplines have helped them be resourceful, and said they give special attention to fellow CalArtians when casting shows or hiring technicians. “What I love about CalArtians is that they are fearless,” said Kubzansky. “When someone walks in and I see on their resume that they went to CalArts, I say, ‘Awesome. They’re not going to be afraid to play.’”

Perhaps most importantly, each panelist agreed that while there are times when theater professionals have to take jobs just to pay the bills, staying true to one’s core creative instincts will eventually pay off. “I believe that if you do great work, people will find you,” Kubzansky said. “Pursue your passion with all the passion you possess.”

The panel was moderated by Terence McFarland (MFA Interschool 03, BFA Film/Video 00), the CEO of LA Stage Alliance, a nonprofit organization that supports the performing arts in greater Los Angeles. McFarland offered this tip: If theater artists are looking for rehearsal space, LA Stage Alliance has launched www.spacefinderla.org. In some cases, the space is available at no cost.