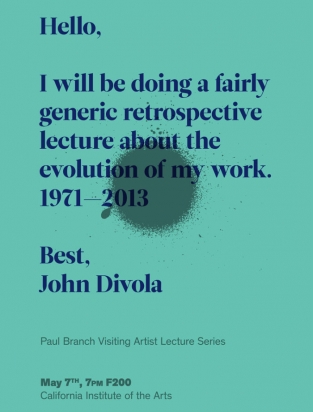 The School of Art continues this semester’s Paul Brach Visiting Artist Lecture Series with a talk by visual artist John Divola at F200 on Tuesday (May 7).

Working primarily in photography, Divola discusses the evolution of his work from 1971 to the present. He’s best-known for projects such as the Zuma Series, which features pictures taken within abandoned houses on Malibu’s Zuma Beach that have been subjected to graffiti and destruction. Divola himself would sometimes make his own marks on the walls, with the resulting photograph becoming a juxtaposition of decay and the rich colors of the ocean.

About the series, Mark Price writes in Art in America (December 2012):

Some 40 years ago, photography-and particularly color photography-was predominantly an amateur documentary tool, an artisanal underling to painting’s full art status. In 1977, John Divola, a few years out of art school, stumbled upon an abandoned lifeguard quarters on Zuma Beach in Los Angeles and graffitied the walls with sweeps of spray paint that accumulated, like an Ab-Ex composition, into allover patterns. Sometimes the strokes hardened into geo­metrical shapes resembling formalist abstraction. He would then photograph this defacement/decoration as a frame for the seaview through the broken windows, claiming the interior as an abstract art ground.

The “Zuma” series (1977-78) extended photographic documentary into something between a subjective visual diary and a record of an art performance.

Above is the poster for John Divola’s talk, designed by Graphic Design Program student Isaac Izzy B (Art MFA 13). Click on the poster to see an animated version.