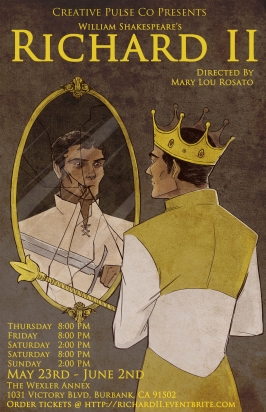 Creative Pulse, an LA-based production company, presents a limited run of William Shakespeare’s Richard II through June 2 at The Wexler Annex in Burbank, Calif. The epic tale of inheritance, family and betrayal features more than 20 CalArts School of Theater alumni and current students working on every facet of the production.

The only play that Shakespeare wrote almost entirely in verse follows the simultaneous fall of King Richard II of Bordeaux alongside the rise of his cousin, Henry of Bolingbroke (later King Henry IV). The central thematic question of monarchal legitimacy—what makes a king legitimately a king?—still resonates today.

The company chose a nontraditional space (a Burbank warehouse) to stage the production as it echoes the cavernous walls of Westminster Abbey, while still grounding the play firmly in the 21st century. To add to the contemporary vibe, the music is mixed live by composer Chris Porter (Music MFA 09), whose dark electronic sound reflects the play’s motifs as they grow and disintegrate.

Richard II is presented Thursdays through Sundays at 8 pm, with two matinee shows on Saturday and Sunday. Student and group discounts are available.