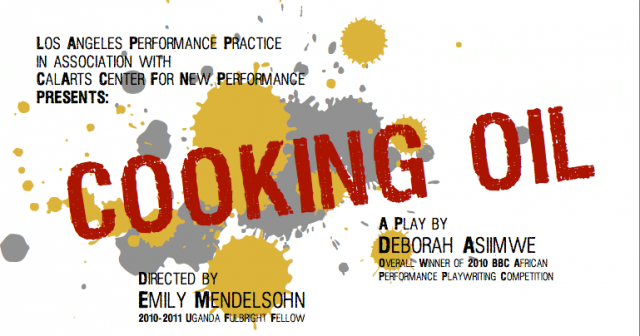 Preview of Cooking Oil, from a performance in Kampala, Uganda, in August 2012.

Cooking Oil tells the story of a village devastated by the murder of Maria, a young girl who, along with a powerful politician, sold vegetable oil that was supposedly free aid from the United States. While the politician pocketed millions of shillings for political gain, Maria pocketed thousands for school fees. Storytellers in the village come to face their own complicity in an endless cycle of corruption as they come to terms with the murder. Combining traditional and contemporary music, dance and chant, Asiimwe and Mendelsohn invite us to interrogate international (in)dependence and how we gaze at a suffering “other.”

Cooking Oil has been in development as an extended international collaboration since its premiere at Uganda’s National Theatre in 2010. The play was performed as part of the Centre x Centre Festival in Kigali, Rwanda, in August 2011 and last year completed a workshop at the In Movement Center for Art & Social Justice in Kampala, Uganda. The play has been gathering an international company of artists from Los Angeles, New York, Kampala and Kigali to explore issues of international aid, women’s educational rights, and the role of performance in social change, while developing a unique American/African performance aesthetic.

“The performance has evolved to include leading actors, dancers and musicians from Rwanda and Uganda. The project is set up as a ritual, where performers and audiences sit together in a circle,” says Mendelsohn. “We committed to a long development process. We have rigorous aesthetic goals, which are made more rich by our commitment to richly get to know the contexts we are each creating from.”

A Public Dialogue Series accompanies the performances in Los Angeles, with individual events posted below. (Click on the links for a list of speakers and commentators):

Below is a slideshow of stills from the production of Cooking Oil: