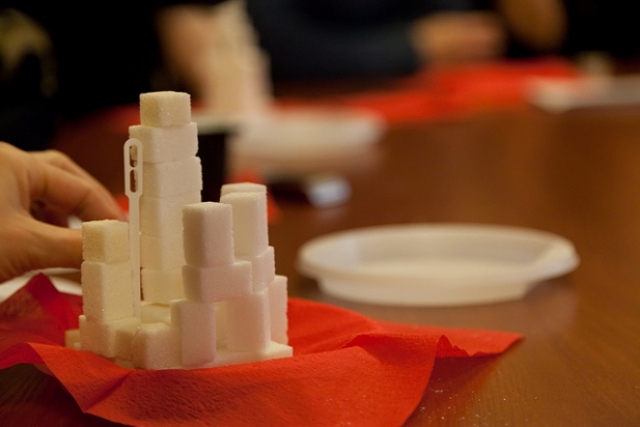 Yelena Zhelezov’s ‘Ghost Development’ is at the Fowler on June 6. (Image: Courtesy of the artist)

In a recent email, Zhelezov describes the work as a “performative negotiation of my personal relationship—as an artist who lives in Los Angeles and grew up in the former Soviet Union—to the symbolic values of the former Yugoslavia’s socialist monuments, currently on view at the Fowler Museum in a photographic form.”

The 30-minute performance uses sugar cubes, utopian architecture, gif animation, miniature objects and interpretive cooking to reconcile Zhelezov’s past and present as well as to explore Moscow and Los Angeles as centers of image production. The Soviet-banned film New Moscow (1938) serves as the multimedia presentation’s point of departure. (An excerpt is posted below.)

The performance is free, and no reservations are required; seating is available on a first-come, first-served basis.

On Friday at 8 pm, as part of the Arroyo Arts Collective’s Puppets Retake Northeast Los Angeles festival, Zhelezov stages a diorama re-creation of an event on the LA River. From the collective:

Puppetry and video recreate a daylong art event that took place at the Arroyo Seco. The piece is a meditative consideration of a body of water, of time passing, an exploration of the present state of a natural habitat, as well as an invitation to engage with the river.

Co-sponsored by the Department of Cultural Affairs, the three-day festival of puppet shows takes place at the Historic Highland Park Ebell Club through Saturday. This festival is free and open to the public, but advance registration is suggested.