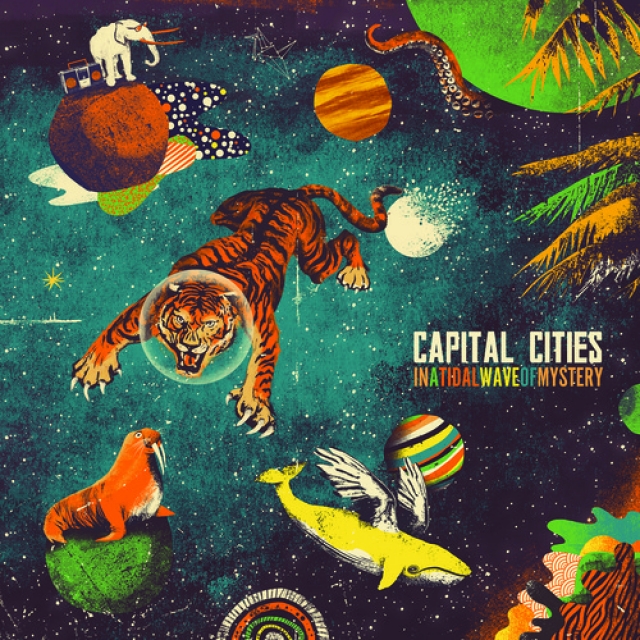 Update: We’ve posted the Capital Cities performance (above) from Conan on June 6, featuring Ludwig on trumpet.

The Los Angeles-based band Capital Cities, fronted by Ryan Merchant and Sebu Simonian, bring their infectious alt-dance grooves to The Conan O’Brien Show on TBS tonight (June 6). Joining the duo’s live group for its national television debut is trumpeter and CalArts student Spencer Ludwig (BFA 4) who’s currently on tour with Capital Cities to promote the just-released album In a Tidal Wave of Mystery.

The hit song “Safe and Sound” (posted above) exemplifies the band’s “electronic-infused pop rock,” and has broken into Billboard’s Hot 100 chart (the week’s most popular current songs across all genres).

In a recent interview with 21st Century Brass, Ludwig discussed his background in music (he was a sax player before switching to trumpet only five years ago) and studying jazz at CalArts with his faculty mentor John Fumo. He also talked about being asked to play with Capital Cities after both he and the band participated in the 2011 Abbot Kinney Music Festival:

At the jam I was asked to improvise over the music, fill in gaps between lyrics, double the synth melodies and hold out long notes to create a vibe. Whatever I did that day clicked and inspired the addition of a new member to the live show. Since that jam session my role has not changed much at all. Capital Cities eventually dialed in the trumpet parts for the record but we decided to leave a lot of space for improvisation in the live show. Almost every song in our current set has a designated trumpet solo section where I get to be creative with my parts, explore the sonic landscape and have a lot of fun. There aren’t many bands in the indie-pop/rock/dance world that showcase the trumpet the way Capital Cities does and I am extremely grateful and inspired to make the most of this unique opportunity to play with Capital Cities.

I also take pride in being a featured instrumentalist in a band whose mission is to write feel good music and whose live shows are about having a good time and dancing your ass off.

Capital Cities with Ludwig play two sold-out shows tonight and tomorrow at the El Rey Theatre in LA and have set tour dates around the world through November.