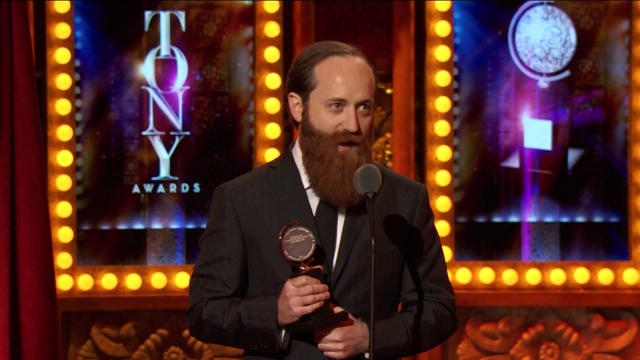 Leon Rothenberg (Theater MFA 02) won the Tony for Best Sound Design of a Play for Douglas Carter Beane’s The Nance. The play stars Nathan Lane as a performer during the burlesque heyday of the 1930s—a time when it was “easy to play gay and dangerous to be gay….”

Rothenberg’s other Broadway credits include The Heiress (2012), A Streetcar Named Desire (2012) and Joe Turner’s Come and Gone (2009), for which he earned his first Tony nomination. (His acceptance speech is posted above).

Christopher Durang’s comedy Vanya and Sonia and Masha and Spike, took home one of the big awards: the Tony for Best Play. Meredith Lynsey Schade (Theater MFA 06) is among the play’s winning producing team. Starring David Hyde Pierce, Kristine Nielsen, Sigourney Weaver and Billy Magnussen, Durang borrows some of Anton Chekov’s most time-tested themes (futility, disillusionment) and tells the story of step-siblings who’ve never left their childhood home in Bucks County, Penn. Their world is thrown into turmoil by a surprise visit from their sister, a world-famous actress, and her much younger boy toy.

A clip from the production: