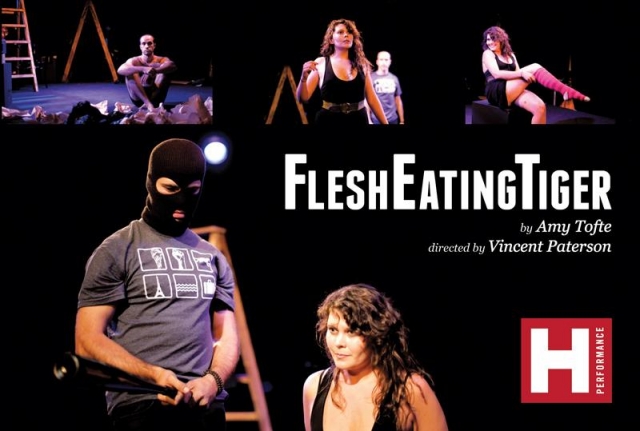 FleshEatingTiger, which started as a workshop piece at CalArts and was performed at Edinburgh Festival Fringe in 2011, tells the story of a man and a woman in the throes of addiction. He struggles with sobriety; she is dependent on his affection. Scenes unravel between realism and absurdism, chronicling an affair under the influence.

24700 interviewed Tofte  and director Vincent Paterson via email about their collaboration on FleshEatingTiger.

Paterson: I had seen the play twice; once at CalArts and again at the Hollywood Fringe Festival. I was intrigued with the material. When Amy asked me to direct, I was delighted as I felt I could give a fresh perspective to the piece by putting my own spin on it.

Tofte: I’m usually inspired to write something by the combination of interesting people I meet in my life and actors for whom I’m interested in creating roles. I’ve met several people in the course of my life touched by addiction. I wrote this looking for a way to understand how difficult it can be to get through it and how it pulls on you in unexpected ways.

24700: Did anything surprise you about the play during the rehearsal process?

P: The rehearsal period was intimate and fascinating and revelatory. We worked in my home and took advantage of using the real living room and bedroom to work on the scenes. Having experienced the play as an audience member, I felt the material was weighted on the side of exposing the challenges involved with alcoholism. While directing the play, I realized that the sexual addiction was the strongest theme of the play. Sex usually is somehow. The sexual exchange between two humans is a complicated seesaw between honesty and lies. There are layers and layers of communication in this play and the four of us attempt to expose them on multiple layers. Sex is the most challenging communication we have as humans…or maybe it is only true for Americans.

T: A good rehearsal process is always full of surprises and we had a great process. I had a few big revelations in particular about the characters and dialogue. A few times I created new lines on the spot while we all sat around and scribbled them into our scripts. Then I’d get to see it incorporated into the scene right away. Some of those moments are now favorites in the play. And they’re really raw—barely changed from the first impulse when I wrote them.

24700: What’s been most important to you in this creative process?

P: I attempt to be a mirror for the actors and the playwright. Since I come to the project with no personal attachments or history, I feel I can objectively see the play in a different light. Honest communication among Gaby and Sam as actors, Amy as writer and me is extremely important. The material deals with sensitive and complicated issues. When attempting to unravel them, to understand them, all of us have to feel we can trust each other. Then we can expose ourselves without judgment.

T: In so many ways this play has been in development until now. This really feels like the first “production.” And a big part of that is Vincent. His precision and respect for the text has been empowering to me as a writer. He’s inspired me to be a better artist and is living proof that following your passion is its own reward. We work very, very hard…but we also have fun.

P: I read the play many, many times. I ask the writer many questions. Sometimes challenging the text. Sometimes asking for clarity.

T: I spend a lot of time thinking about plays and stories before I write them. I have stacks of notebooks with ideas, outlines, pieces of dialog. But each play is different. Sometimes I have a really clear outline and other times I figure it out as I go. Once in production I read the script in between rehearsals and spend a lot of time cutting lines. I also like to listen to the dialog without watching the actors or seeing the words on the page. I always go into a new rehearsal process willing to change text or make other big changes that help improve the story. That’s the most important thing for me and it’s harder than it sounds…being truly open to the ideas of others.

24700: Did this production require much research on your part?

P: I am usually a research fanatic. Honestly, this time, I didn’t do the amount of research I usually do. Amy was an internet of information whenever I had a question. She had done masses of research before she wrote the piece. I did read most of the AA hardcover book. I have friends who have gone through the AA program so I am familiar with it to a point.

T: I love research. And no…Wikipedia is not research. I often buy and read lots of books. I love current events, documentaries and talking to people with first-hand experience. I feel like playwrights are part investigative journalists by nature because we’re curious about human nature. I usually do some form of research for a play. Even if that means talking to someone I just met about an interesting job they may have, who knows—I might use it in a play at some point.

24700: Are you attempting anything new for you as an artist in this work?

P: I always attempt something new. This time it is playing with the creation of a soundscape and soundtrack. I love music and have played in the music world for most of my career in some form or another. I love soundtrack cd’s. I think sound can enhance any dialogue, action or emotion. Besides collaborating with John Nobori on sound and sound effects, Rene Lamontagne, a composer and musical artist from Montreal, is rerecording new versions of some classic tracks as well as creating original tracks for the show. The play has over 20 vignettes. Rene’s compositions and John’s sounds will sometimes be used to underscore sections of a scene. Sometimes the music will begin toward the end of a scene and guide the audience through the transition to the next. Rene has also written a song called FleshEatingTiger that will be played under the bows.

T: In some ways I think I’m trusting myself as a writer more than I ever have. I know this play, the characters and the subject matter really well. I am making changes from a place of confidence and that feels great.

24700: How has your art practice evolved over time?

P: I suppose there has been an evolution in my ability to be more precise with my direction. I trust my instincts more quickly and this assists me in my clarity with an actor. I’m not afraid to admit I don’t know something.

T: Like a lot of other playwrights, I started as an actor. And I always think I’m a bit of a fraud trying to write plays. But I feel better about calling myself a writer now, like I know a little bit of what I’m doing. And I’ve become more disciplined about the actual writing I do every day.