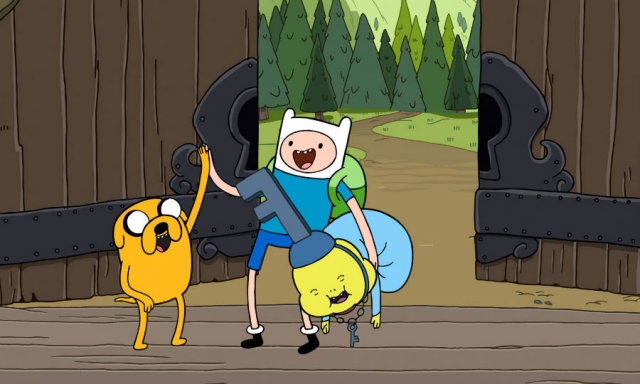 The two travel through the mystical Land of Ooo, encountering its colorful inhabitants, both good and bad. The best friends usually find themselves in the midst of some scrape or escapade, fighting evil when they can.

The NPR story by Neda Ullaby focused on the show’s appeal to both children and adults alike:

[Ward] modeled Jake partly after Bill Murray’s sardonic camp counselor in the 1979 movie Meatballs, a cooler-than-cool older-brother figure who can laugh at his charges without being mean and whose teachable moments are anything but cloying….

In the episode, called “New Frontier,” Jake experiences a vision during which he’s taken to an afterlife of stars and darkness by a little bananalike creature (voiced by Weird Al Yankovic).

“When I die, I’m gonna be all around you,” Jake reassures Finn. “In your nose. And your dreams. And socks! I’ll be a part of you in your earth mind. It’s gonna be great!”

“That episode was really tough to tackle, writing it for a children’s television show,” Ward remembers. “It was hard for us to really not make it so sad and scary that you feel really sad and scared watching it.”

Adventure Time insists on emotional honesty — even in its bad guys, usually depicted as cardboard villains in kids’ cartoons.

The show is based on a short film produced by Ward for Frederator Studios. It became a viral hit on the Internet and was eventually picked up by Cartoon Network. The show continues to grow in popularity—as proved in a quick reading of the kudos posted on the NPR story’s comments section.

Clip from Adventure Time: The Evil Forest episode below: