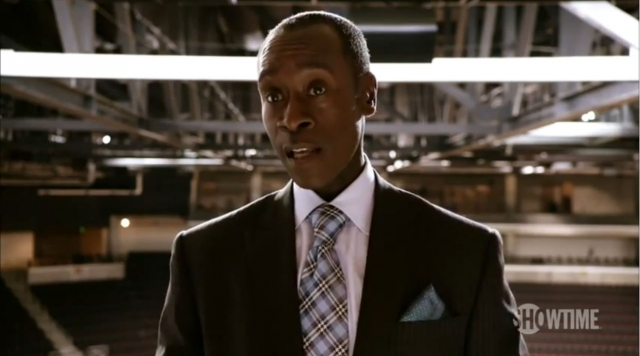 Nominees for the 65th Primetime Emmy Awards were announced this morning (July 18) and CalArts alumni were among those earning nominations.

Don Cheadle (Theater BFA 86) received a nomination for Outstanding Lead Actor in a Comedy Series for his role in Showtime’s House of Lies. This is Cheadle’s sixth Emmy nomination, and the second for his portrayal of the management consultant Marty Kaan in the show.

Bravo’s Top Chef, for which alumna Casey Kriley (Film/Video MFA 98) is an executive producer, has been nominated for Outstanding Reality-Competition Program and for Outstanding Cinematography for Reality Programming.

Above, we posted a clip from House of Lies, starring Cheadle, Kristen Bell, Ben Schwartz and Josh Lawson.

For a complete list of the nominees, visit this page. Winners of the Primetime Emmy Awards will be announced live on Sept. 22 at 5 pm on CBS.

Update: We’ve just received word that CalArts lighting designers make up half of the nominations for Lighting Design/Lighting Direction for a Variety Special. Harrison Lippman (Theater BFA 08) is nominated for his work on CBS’s The 55th Annual Grammy Awards and Robert “Bob” Barnhart (Theater BFA 87) is nominated for several lighting awards: PBS’s Andrea Bocelli: Love in Portofino, So You Think You Can Dance (Fox), The Oscars on ABC and the Super Bowl XLVII Halftime Show Starring Beyoncé (CBS and NFL Network).