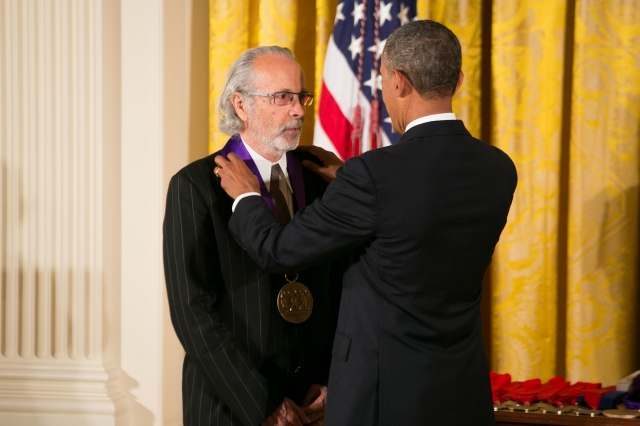 Earlier this month, on July 10, President Barack Obama presented 12 artists with the National Medal of Arts—the highest honor bestowed upon artists and arts patrons by the United States government. Among the 2012 medal recipients is legendary trumpeter, vocalist and songwriter Herb Alpert.

Alpert, a music icon and philanthropist, is best known for his work with the Tijuana Brass. He has sold more than 72 million albums during the course of his career, and transformed the music industry by co-founding A&M Records with Jerry Moss. An eight-time Grammy Award winner, Alpert just released his 34th studio album Steppin’ Out, with his wife, Grammy-winning singer Lani Hall.

Alpert founded The Herb Alpert Foundation in the early 1980s, and since then, has provided significant and sustained financial support for music and arts education, jazz studies and organizations that work toward creating a compassionate and empathetic society. The Foundation has awarded $125 million in grants to date. Additionally, in conjunction with CalArts, Alpert founded the annual Alpert Awards in the Arts in 1994, which makes grants of $75,000 annually to five mid-career artists in the fields of dance, film/video, music, theatre and the visual arts. Over the course of a 25-year relationship with CalArts, Alpert has contributed to the establishment of the Dizzy Gillespie Chair in Music in the 90s, funded the Dizzy Gillespie Digital Recording Studio and established a $15 million endowment for the Institute’s music programs. The School of Music was named The Herb Alpert School of Music at CalArts in 2008.

The National Medal of Arts awards were established by Congress in 1984. Each year, the National Council of the Arts and the Arts Endowment’s advisory council recommends individuals and organizations it deems worthy of recognition to the President.