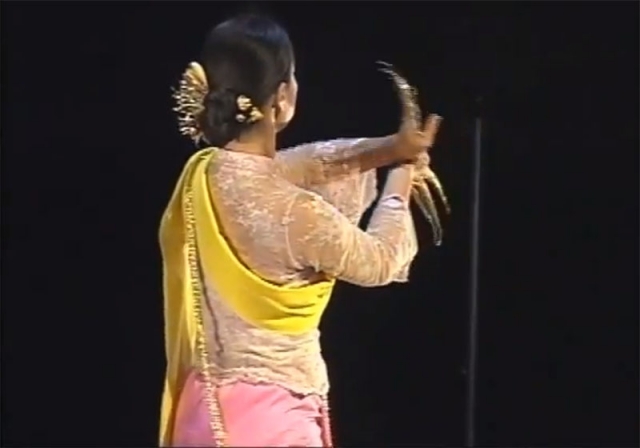 REDCAT continues its celebration of boundary-crossing performance art in its New Original Works Festival, now in its 10th year. The second week of the festival begins on Thursday (Aug. 1) and features three female performers as one actress; a dysfunctional conversation between Beyoncé and futurist painter and composer Luigi Russolo; and a contemporary take on Northern Thailand’s traditional finger dance.

Director, choreographer and performer Jennie MaryTai Liu collaborates with visual artist Tanya Brodsky to investigate how being a woman colors the desire to succeed in Actress Fury.

Ambition is a deeply knotted rope of heartfelt aspiration, issues of ego, tireless discipline, and fear of failure. Actresses Playing Warriors [Actress Fury]  is a theatrical event that parses open the conundrum of female ambition as it wrestles with the prospect of motherhood, within the restrictions of patriarchy. Three female performers conjure a larger-than-life actress who shifts between roles: Ajax—the mythic warrior whose ego caused him to commit a deluded act that shames him to suicide; Vaslav Nijinsky—the demigod dancer turned schizophrenic; and the legendary and controversial movie star Joan Crawford.

Tyler Matthew Oyer: 100 Years of Noise: Beyoncé is ready to receive you now

In School of Art alumnus Tyler Matthew Oyer’s (MFA 12) experimental production, Luigi Russolo, who wrote the Futurist manifesto The Art of Noises, and pop and R&B singer Beyoncé, famous for Single Ladies (Put A Ring On It), among other Billboard-topping pop hits, hold a conversation.

Tyler Matthew Oyer places these two figures—a powerful pop diva at the top of her game and a man who sought the “great renewal of music”—in a dysfunctional dialogue across a century. With stark contrast, contradiction and absurdity, 100 Years of Noise: Beyoncé is ready to receive you now illuminates the politics of aural pleasure, past and present.

Dancers Waewdao Sirisook and Ronnarong Khampha are contemporary practitioners of fauwn leb, a traditional dance from Northern Thailand, in which dancers wear long brass fingernails to accentuate wrist motions. In Fauwn Leb/Identity, the two practitioners perform a duet with depth and humor, ultimately exposing the way the marketable symbol of the region’s Lanna heritage wrestles with its distortions by economic and political interests.

Above, we posted an excerpt from a performance of Fauwn Leb/Identity by Sirisook and Khampha at Our Roots Right Now, a theater festival held in January at Chulalongkorn University.