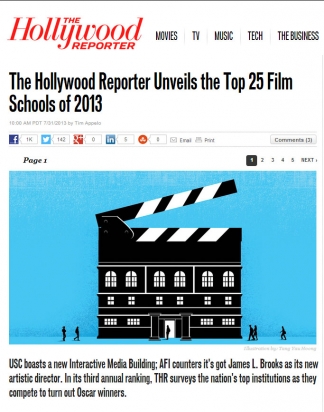 The Hollywood Reporter’s report on the top 25 film schools in the nation.

The Hollywood Reporter released its third annual rankings of the top film schools in the nation yesterday (July 31), and CalArts’ School of Film/Video is in good company as it secures 5th place, alongside prominent film schools such as USC, AFI, NYU and UCLA.

For this year’s rankings, THR consulted a brain trust of industry insiders, and also solicited anonymous votes from members of the Writers Guild of America, West, American Cinema Editors and the Academy of Television Arts & Sciences.

Here is what the THR report says about CalArts:

Art school grads are supposed to be penurious, but at Valencia’s CalArts, films made by alums have grossed more than $25 billion. The Los Angeles Times called it “the Harvard Business School of animation.” Three of nine student films in the Telluride Film Festival’s most recent Filmmakers of Tomorrow program were by CalArtians, and three of this year’s Academy Award nominees for animated feature were by alums. CalArts also was represented heavily at the New York Film Festival, the Whitney Museum Biennial, Sundance (where Yung Jake was tabbed a breakout art star by LA Weekly) and PBS’ recent Film School Shorts series. Alumni cover the waterfront from pop culture to high culture: As James Mangold’s The Wolverine headed for the multiplex, Erika Vogt has had big shows at Manhattan’s New Museum and L.A.’s Museum of Contemporary Art.

Below is the complete list of the top 25 film schools: