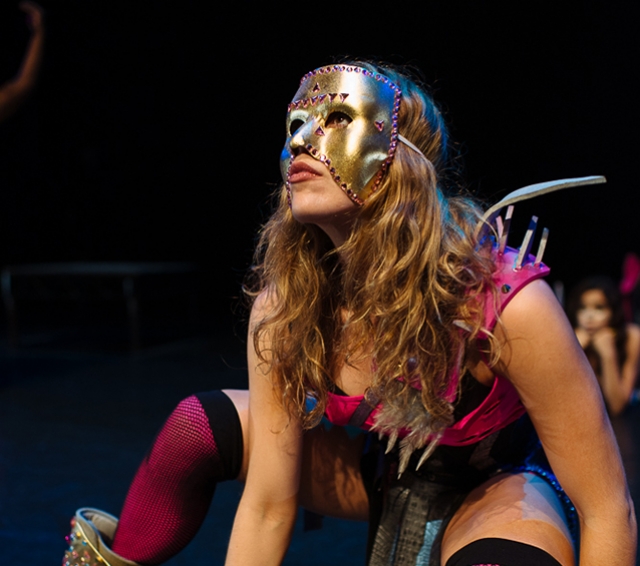 REDCAT’s summer incubator for daring performance, the New Original Works Festival, takes the stage tonight (Aug. 8) for its last weekend run with a three-part program that features a libretto derived from internet comments, a dance tracking the initial stages of human connection, and a Britney Spears-Sophocles mashup. All three works continue through Saturday, Aug. 10.

CalArts alumnus Daniel Corral (Music MFA 07) pieces together user-posted commentary from YouTube’s most “disliked” videos into an operatic venture. The eight-piece accordion ensemble Free Reed Conspiracy accompanies experimental chorale ensemble The People’s Microphony Camerata, whose members will both sing and recite the sometimes vitriolic comments from anonymous online trolls. “Dislike is a 21st-century operatic testament to the breadth of emotions swirling around the internet,” according to the program notes.

Morgan Thorson and Meg Wolfe: The Other Thing

Minneapolis-based choreographer and dancer Morgan Thorson embarks on a performance that’s personal, maybe even awkward, with Los Angeles dance artist Meg Wolfe. With the pair meeting for the first time to stage this project,  The Other Thing conveys the process of two strangers getting to know each other almost in real time.

We still don’t know each other well, but because we aren’t best friends or lovers or confidants, we have fresh, baby eyes for watching each other dance and make decisions. Nothing gets in the way. We wanted this kind of social condition to engender physical closeness and desire, and as point of departure. And, we are getting to know each other. We chose each other because through our limited encounters over the last decade, we both understood without actually saying it to each other that dance is inconvenient, demanding and often the work determines its own course of action. This work is personal.

CalArts alumni Paul Fraser (Music MFA 11), Genevieve Gearhart (Theater MFA 13) and Deena Selenow (Theater MFA 12) bring the taste of a poison paradise to a disabled Greek warrior’s suffering in Toxikos. Deconstructed musical themes from Britney Spears’ 2004 hit single “Toxic” are woven into Sophocles’ Philoctetes, a tragedy about a warrior wounded and abandoned during the Trojan War.  This all-male play is performed by an all-female cast of six vocalists, supported, at times, by the audience playing kazoos.