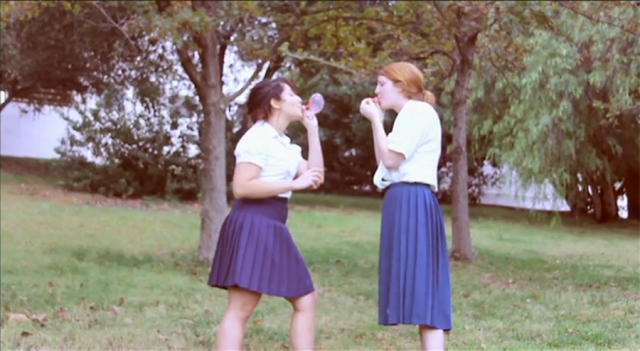 Johnson exposes the fragility of intimacy in the multimedia theatrical performance Mask. The character Fred learns about his wife Annie’s infidelity just hours after discovering that he can remove his face. He and Annie reveal layer after layer of intimacy in this “tight, vicious and violent” production. Mask is directed by Allison M. Keating (Theater MFA 14) with Rachel Cox (Theater BFA 16) as assistant director. It stars Ernie Long (Theater BFA 14) and Sandy Simona.

Whispering in the Dark turns a macabre historical anecdote into the subject of a fantastical one-act play. On June 22, 1954, Pauline Parker and Juliet Hulme bludgeoned Pauline’s mother, Honorah Repier, to death so they could run away together. The trial that followed—sensationalized because of the girls’ ages and presumed lesbian relationship and insanity—led to the girls’ imprisonment and ultimate estrangement. Whispering in the Dark picks up in the afterlife, where Parker and Hulme meet for the first time since committing their crime.

Above, we posted the trailer for Whispering in the Dark.

In addition to the School of Theater presence at the festival, CalArts archivist Kathy Carbone is in Edinburgh for a collaborative project with Library Studies graduate students from the University of Maryland. As it follows the three CalArts productions from pre-production to strike, the group is documenting the experiences of the artists within the immersive festival environment.

The Maryland students are capturing the CalArts performances and related media through their blog Follow the Fringe: Documentation and Preservation of Cultural Movements in Media and through Twitter. Follow the hashtag #mlsfringe for updates in real time.

**Update: Another CalArtian (not performing at Venue 13) Allan Trautman (Theater MFA 78) and the irreverent cast of Puppet Up! Uncensored receive rave reviews at Edinburgh Festival Fringe.