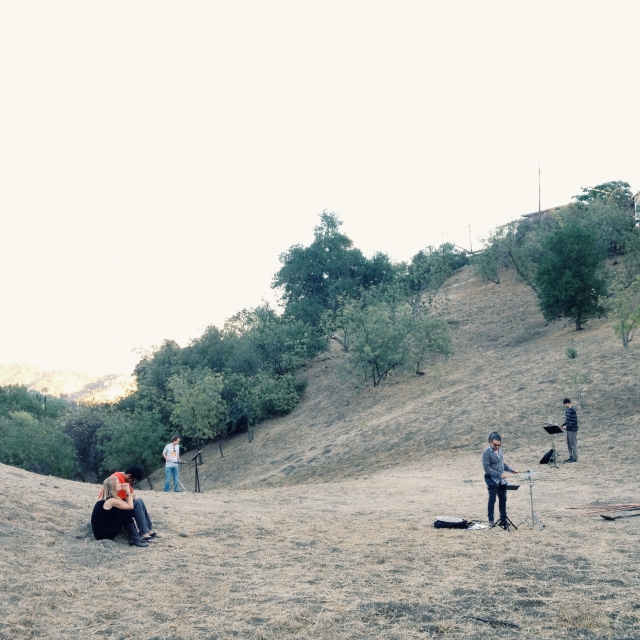 Last week, the L.A. experimental music festival Dog Star Orchestra returned for its ninth year. The series of concerts created by composer and CalArts faculty Michael Pisaro, brings together the local experimental music community for nine concerts in two weeks at the culmination of summer.  The festival began on Monday (Aug. 5) and wraps up on Aug. 17.

This year’s series is co-directed by alumni Colin Wambsgans (Music MFA 11) and James Klopfleisch (Music MFA 10), with each of the nine concerts curated by a separate Los Angeles-based composer. Like last year’s festival, each concert covers a broader scope of experimental music, ranging from aleatoric music to music created with nature sounds. Some concerts include one or two longer works, while other programs feature many composers’ works. The concert venues vary from music performed in a canyon and at Echo Park Lake, to house concerts around Los Angeles and traditional venues like Automata in Chinatown and the Wild Beast at CalArts.

“A couple of concerts feature real warhorses of the genre (in as much as this genre has warhorses) such as Christian Wolff’s Changing the System and Morton Feldman’s For John Cage. There are also many premieres from LA composers and special performances and pieces by Dutch composer and pianist, Dante Boon,” says Wambsgans via telephone. “Generally, the festival is a nice way for L.A. experimental composers to coalesce around a series of events that happen towards the end of every summer.”

The final show on Aug. 17 at the Wild Beast features music by multiple young composers from the German experimental music label, Wandelweiser.

Below is the schedule of remaining concerts:

Through Aug. 17 See above for venues and times All concerts free