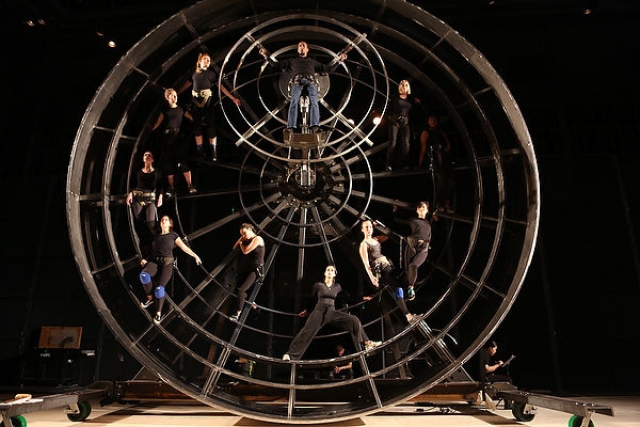 The wheel at a rehearsal of ‘Prometheus Bound’ at CalArts in June. | Photo: Steve Gunther

There’s high art, and then there’s art that involves a 23-foot steel wheel. CalArts Center for New Performance (CNP), the School of Theater’s professional producing arm, teams up with The Getty to stage Prometheus Bound at the Getty Villa in Malibu, Calif., from Sept. 5 through 28.

The wheel was transported from its temporary home at the Walt Disney Modular Theater on campus to the Getty Villa’s Outdoor Classical Theater last month. Scenic designer Efren Delgadillo, Jr. (Theater MFA 03) along with artistic director and dean of the School of Theater Travis Preston designed and constructed the wheel along with LA ProPoint, a company that fabricates amusement park rides. It took Delgadillo and Preston about 15 variants and countless studies of clock gears, water wheels and Leonardo da Vinci’s drawings to decide on the wheel’s current iteration. The wheel, which weighs 5 tons and features an orbiting center, stands in for the mountain that the title character Prometheus is chained to as punishment for stealing fire from the gods. Ron Cephas Jones will play Prometheus while strapped to the enormous wheel and perched on a modified bike seat. Twelve female chorus members will also climb the wheel at several points in the production. All actors shall be trained on stage flight by Las Vegas-based theatrical flying service Flying by Foy.

About 45 CalArtians are involved in the production, and for many of them, Prometheus Bound is their first professional experience. “Instead of just working in the classroom structure, [students are] playing very significant roles,” says Preston. “This is a very important dimension of [CNP’s] mandate—to give our students professional relationships, contacts, and experiences. And it’s a great opportunity for CalArts, because the Getty is such a tremendous partner and is well funded. This gives our students opportunities that they wouldn’t otherwise have.”

News outlets such as CNET and the LA Times have taken notice of the wheel and the production, with both media featuring the wheel in separate write ups. “It’s almost like a contemporary art installation,” says Getty Museum performing arts manager Laurel Kishi.

Below, we posted a video of the wheel being assembled at the Getty using a crane:

24700 will be offering more in-depth coverage of this promethean production as it nears its opening night.