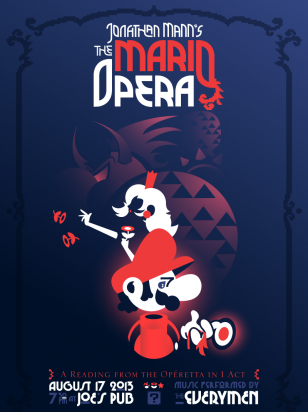 Jonathan Mann first began ‘The Mario Opera’ while a student at CalArts.

Jonathan Mann, the CalArts alumnus who’s earned web fame for crafting a song a day on YouTube for the past four years, brought his music to the live stage last week.

At the noted Joe’s Pub at Public Theater in New York City on Aug. 17, Mann (Critical Studies MFA 05) staged a reading / performance of the first act of a rock opera that he began while a CalArts grad student in 2005. Mann’s opera was dedicated to one of his favorite old-school video games: Super Mario Bros.

The 1985 video game’s storyline pits Mario (and his brother Luigi) against evil Bowser in an adventure through the Mushroom Kingdom to rescue Princess Toadstool. In The Mario Opera, our protagonist recognizes the “repetitive familiarity of his adventure [leading] to an existential crisis about being a character in a videogame.”

The Mario Opera was originally performed at CalArts and at several venues around LA, including The Smell, Key Club, Barnsdall Gallery Theatre and the Knitting Factory.

Mann hopes—as any good gamer would—that this latest staging will lead to a second life for our hero.

From a recent Wired Magazine interview:

“The reaction to the Mario Opera is, and has always been, overwhelmingly positive,” says Mann. “My ultimate goal at this point is to give the thing a proper run. I’d love to have it be a long-running thing at a small club, where it just [runs] every weekend for a really long time, something that Mario fans and fans of old-school games in general can come from all over to see…”

The Joe’s Pub date sold out quickly, so Mann’s eight-year opera in the making may get that bonus life, after all.