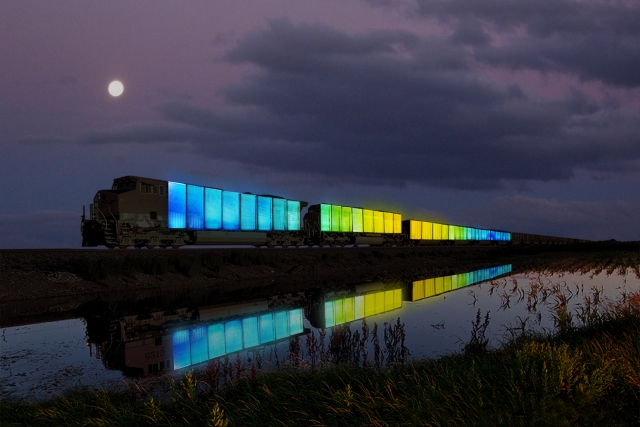 Over the course of three weeks this month, Aitken’s new nine-car art train will roll from New York City to San Francisco making 10 stops along the way. At each stop, STS has invited artists, musicians, chefs, authors and filmmakers—including several CalArtians—to participate in a series of site-specific events.

The Levi’s-sponsored train, designed by Aitken, is itself a piece of art, and includes five video editing suites, a recording studio, a chef car and crew sleepers. The idea behind the project is to broadcast content and experiences from the stops as well as on the moving train in order connect artists with diverse communities and to “push art and culture outside of institutional constraints.” STS will also raise funds through ticket sales and donations to support nontraditional programming at seven partner museums around the country, including MoMA PS1, Carnegie Museum of Art, MCA Chicago, LACMA and SFMOMA.

Glynn will use the Minnesota River train car to build a yurt, while Pink will use the recording studio train car, as described in a recent article on Pitchfork.com:

Ariel Pink … will live on the train and use it as a studio. He’ll collaborate with other artists on the trip to create “a modern song-cycle that speaks to our times,” according to a press release, using an exquisite corpse approach.

Read more about the event via articles in Wired Magazine and The Huffington Post.

Below is a preview of STS:

Station to Station: A Nomadic Happening