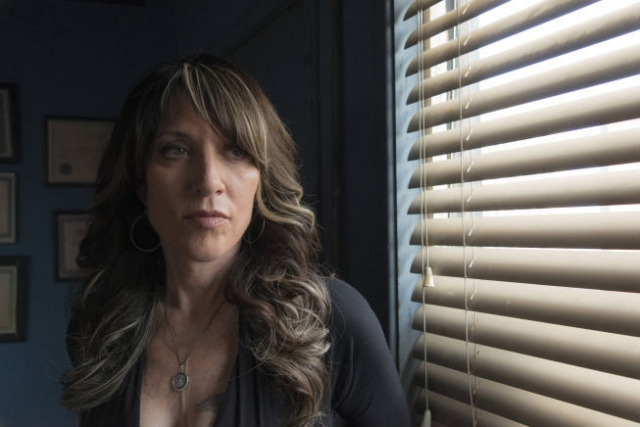 CalArts alumna Katey Sagal (Theater 72) returns for her sixth season of the television show Sons of Anarchy (SOA), which premieres today (Sept. 10) on FX. In the long-running show, the Golden Globe-winning Sagal plays the matriarch of a motorcycle gang. The critically acclaimed show is scheduled to end its run next year.

In a recent interview with the New York Daily News, Sagal talked about Sons of Anarchy’s final seasons and where her character “Gemma” is headed:

The series — essentially “Hamlet” on Harleys — picks up where last season left off. The motorcycle club’s president, Jax Teller (Charlie Hunnam), is juggling his newfound distaste for guns (the club’s livelihood) with his devotion to his young sons and imprisoned wife, Tara (Maggie Siff). His stepfather, Clay (Ron Perlman), is finally behind bars, thanks to Jax successfully framing him for a gang leader’s murder.

So where does that leave club matriarch Gemma?

“In the beginning (of season six), the pieces are in place,” says Sagal. “I would tend to think that she is somewhat happy. These are people whose survival depends on a lot of action. She doesn’t sit around. She’s on to the next thing. They’re anarchists.”
…
Luckily for Sagal, she’ll be leaving behind one of the most memorable — and critically acclaimed — strong female roles on television. Gemma is part Lady MacBeth, part Jewish mother, and all hardass. In season six, that toughness comes out in her relationship with Tara, Jax’s old lady.

“Their relationship is like a mother and a teenage daughter,” says Sagal. “It’s complex. They love each other and they hate each other.”

Despite making a name for herself as an actor, it’s a little-known fact that she began her career as a singer-songwriter. She sang backup for a number of music greats, including Bob Dylan, Etta James, Bette Midler, Olivia Newton-John, Tanya Tucker among others.

Sagal will mix both her acting and music talents at the SOA premiere celebration on Sept. 15 at the El Rey Theatre in Los Angeles, where she’ll be performing with the Forest Rangers, who are the “house band” for Sons of Anarchy. (The band was developed by the show’s music supervisor and musical director Bob Thieleat.)

The evening will mostly likely include tunes from Sagal’s upcoming album release, Covered (her third solo album), which will be released digitally on Oct. 22.

'Sons of Anarchy' Celebration with Katey Sagal and the Forest Rangers