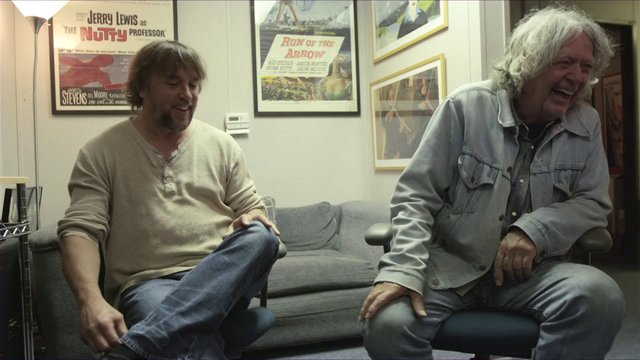 For years, filmmaker and CalArts faculty member James Benning has earned accolades for his work behind the camera. But the director of such experimental films as RR, 11 x 14 and One Way Boogie Woogie was recently recognized at the 70th Venice Film Festival for his onscreen persona in the documentary Double Play: James Benning and Richard Linklater.

Director Gabe Klinger’s film profile of Benning and fellow filmmaker Linklater (Slacker, Before Sunrise) earned the Venezia Classici Award for Best Documentary at the festival, which was presented at festival’s closing on Sept. 7.

Double Play: James Benning and Richard Linklater is a low-budget documentary that was largely shot during the course of a weekend in Austin, Texas, and completed with the aid of a Kickstarter campaign. Klinger captures the two quintessential American filmmakers, who first met in 1988 through the Austin Film Society, in conversations ranging from art and sports to friendship. Klinger also intersperses archival footage and film clips among the dialogue.

From a feature on Double Play in The Chicago Tribune:

The men seemed like complete opposites, Klinger wrote in a recent essay for Filmmaker magazine, and yet they have an enduring kinship: “The guy who made ’10 Skies,’ which comprises 10 static shots of clouds as they move across the sky, and the guy who made ‘School of Rock’ — who knew?” Benning is 70; Linklater 53. Klinger was able to convince them to meet up in April to talk, knock around and maybe play a little baseball. “My biggest nightmare was that the two would flake and I would be left with my crew of 12 shooting tumbleweeds (something Benning would surely appreciate).”

“What sparked the idea?” Klinger said when I tracked him down by email in Venice. “Something about these two filmmakers being different and alike. That they are both former college baseball players also intrigued me. And also that I like them very much both as people and filmmakers. And that their films embody so much of America, its follies and its splendors.”
…
“When you get down to it, they’re both a couple of weird outsiders who are incredibly lucky to have been able to keep making films exactly in the way that they have always set out to make them,” Klinger said. “In the end, these guys aren’t so different. They’ve consistently made personal films that manage to express a particular world view, and that has become very rare in American cinema.”

A 2014 U.S. release is already planned by the New York-based digital distributor FilmBuff.