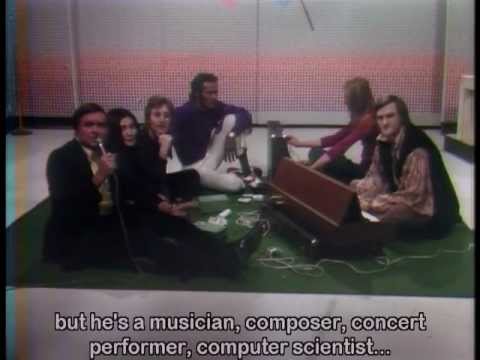 We found this television clip from the “wayback machine”—also known as YouTube—featuring David Rosenboom, dean of The Herb Alpert School of Music at CalArts, on The Mike Douglas Show with two of the era’s most recognizable faces: John Lennon and Yoko Ono. Chuck Berry, a rock great himself, also joined the eclectic group onstage during the show’s broadcast.

We emailed Rosenboom about the clip, and he provided us with a little more information about the video:

We did the show in 1972, after I had gotten to know John and Yoko. They were co-hosts of The Mike Douglas Show that week, and they invited me to join them. (I had also appeared on a previous Mike Douglas Show about a year earlier, that time with Hermione Gingold, Terry Thomas, and Jack Haley, the Tin Man [from The Wizard of Oz]. I also did The Dick Cavett Show and a bunch others around that time and for some years after.) Years later, VH1 started re-broadcasting the show with John and Yoko over and over again. Then, Rhino Home Video brought it out as a commercially distributed video cassette. Ever since then, it seems to appear in a big wave every once in a while.

In the video, Rosenboom explains biofeedback—a process by which a person can listen to his or her own physiological processes to learn to control them—and then tests the biofeedback instrument on Douglas, Lennon and Ono.