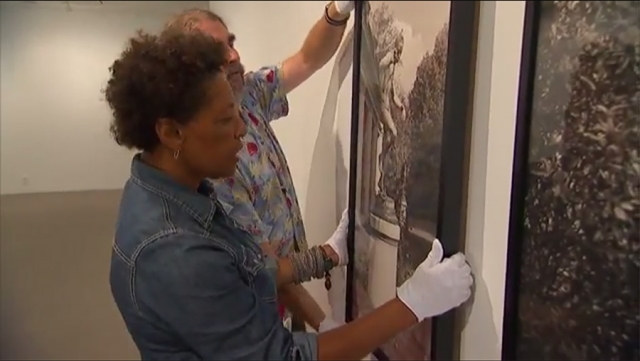 Every year, the MacArthur Fellows Program, or the “Genius Award” as it is often called, grants an unrestricted amount of $625,000 over five years to men and women who have shown “extraordinary originality and a marked capacity for self-direction.” Among the 24 fellows selected this year is photographer, filmmaker, activist and CalArts alumna Carrie Mae Weems (Art BFA 81).

Weems has been making photos since receiving her first camera in 1973. Today, her prolific art practice goes beyond photography and includes video installations, film screenings and television work. Although her practice is said to be informed by race and gender, she describes it as being about the human condition, as she articulates in a recent New York Times interview:

At the end of the day, it has a great deal to do with the breadth of the humanity of African-Americans who are usually stereotyped and narrowly defined and often viewed as a social problem. I’m thinking that it’s not about social problems, that it’s about social constructions. The work has to do with an attempt to reposition and reimagine the possibility of women and the possibility of people of color, and to that extent it has to do with what I always call unrequited love.

Weems is also engaged in social work and activism. The murder of a child a few years ago in Syracuse led her to initiate Operation: Activate, a public art project that calls for the end of violence through billboard advertisements and matchbooks. Weems founded The Institute of Sound + Style, a paid summer program that offers teens from low-income families the chance to learn about fashion and music production. She wants to tell them: “You don’t have to be a rap singer, that you could be an engineer, that you don’t have to be in the photograph, that you could make the photograph.”

When asked what she plans to do with her grant, Weems answers that she has been thinking of making a fictional autobiography about women who grew up in the 60s who are now turning 60. She says the grant gives her the freedom to work on the project. As for winning the grant itself, Weems has this to say:

It is beyond wonderful. I feel like I am dancing in the stratosphere. I am sitting here with my tiara on and all of my fake jewels, and a bottle of Champagne that’s half empty. Or should I say half full?

Above is a video clip of Weems from the MacArthur Foundation.

Read about this year’s MacArthur fellows.