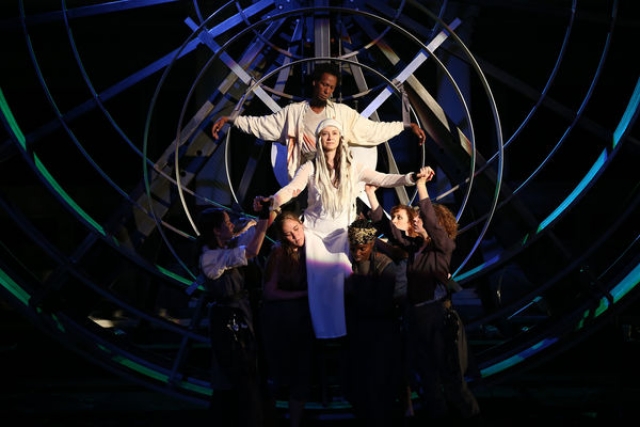 This weekend marks the final chance to see CalArts’ Center for New Performance (CNP) production of Prometheus Bound at the Getty Villa in Malibu. Since its opening earlier this month, the critical response has been nothing short of spectacular for the production, which features the work of theater veterans and CalArts faculty, students and alumni alike.

The new translation of Aeschylus’ Greek tragedy revolves around the thematic exploration of revolt and punishment, as directed by CalArts’ School of Theater Dean and CNP Artistic Director Travis Preston. It stars veteran New York performer Ron Cephas Jones as Prometheus—the Greek god chained to a mountain for eternity. In CNP’s version, however, the mountain has been replaced by a now-famous 5.5-ton wheel on the Getty’s stage, conceived by Preston and designed by Efren Delgadillo, Jr. (Theater MFA 03). Jones is harnessed to the wheel for most of the play.

In his review of Prometheus Bound, Myron Maisel wrote in The Hollywood Reporter:

The vision of director Travis Preston makes the most of this thought-provoking material and the environmental possibilities of the venue and the design. No thread of argument is scanted, yet the movement and diction of the players remains lucid and forceful: This is a deeply considered rendering, without obfuscation or vague passages, its gestures dynamic and pointed. The effective mix of actors is glorious, from the magisterial and tormented Prometheus of the grand talent Ron Cephas Jones (blessedly making his Los Angeles theatrical debut) to the desperately frenzied Io of Mirjana Jokovic, the splendid 12-woman chorus of CalArts grads and such stalwarts of the local scene as Adam Haas Hunter, Tony Sancho and Kalean Ung.

“I think this production is paradigmatic of what the CNP should be,” Preston said in a recent interview. “It’s giving important professional experience to our students and alumni, serving as a vital bridge to the profession as well as amplifying CalArts’ impact in the larger world.”

Preston said that the CNP is currently participating in active conversations in the hopes that the production will “have a future life at theater festivals in the U.S. and abroad.”