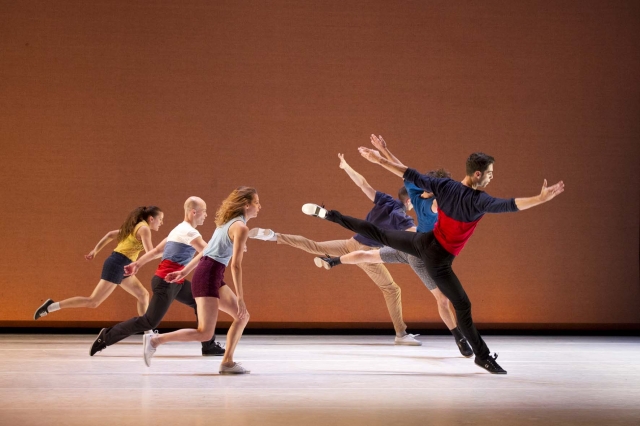 An image from ‘Murder Ballads,’ which opens in London on Oct. 2. | Photo: Laurent Philippe

Brandon Stirling Baker (Theater BFA 10) has once again teamed up with The New York City Ballet choreographer Justin Peck for Murder Ballads, a contemporary dance piece soon to premiere at The Sadler’s Wells Theatre in London. On Sept. 18 the show premiered in Lyon, France, opening the Maison de la Danse’s season to rave reviews from none other than The New York Times.

Murder Ballads was commissioned by Benjamin Millepied’s L.A. Dance Project and features a musical score by Bryce Dessner, of indie-rock luminaries The National. Dessner based the music on American folk songs from the 1930s and ’40s, lending the performance its beautiful-cum-morose ambiance. Millepied, known to some for his performance in Darren Aronofsky’s The Black Swan (2010), which he also choreographed, co-founded the L.A. Dance Project last year.

Baker, who designed the lighting for Murder Ballads, says his work comes directly from Dessner’s score. “For me the music tells me everything I need to know about color, shape, energy and musical timing. In a way it also becomes my visual map for how a ballet is structured.”

The work comprises six movements, each inspired by an American folk tale. That said, don’t expect this to be a narrative ballet. Murder Ballads is all about concept and broader emotional markers. Says Baker, “For example, one movement was called Tears for Sister Pauly. We created a very warm intimate environment that slowly turned into a large scale pale-white surrounding, in a subtle way representing the transition from life to death.”

Contemporary is the key word for this ballet. The dancers wear sneakers and other casual wear, leading Times writer Roslyn Sulcas to make apt parallels to works like the Jerome Robbins musical, West Side Story. However, the connection may be more than sartorial, noting the Ballet’s use of strong and bright hues in both costume and set. “My role as the lighting designer was to find the offbeat dark undertones and reveal them to the audience in very subtle and sometimes even colorful ways,” explains Baker. “I learned from Dessner’s melodic score that even a subject as negative as death can still be visualized in a beautiful, delicate atmosphere.”

Murder Ballads will have a special engagement at The Sadler’s Wells Theatre from Oct. 2 to 4. In 2014, the show will be re-worked to include new visual elements by painter Sterling Ruby. This version, tentatively called Murder Ballads 2.0, will premier March 14, 2014, in Paris. The 2014 U.S. premier is to be announced.