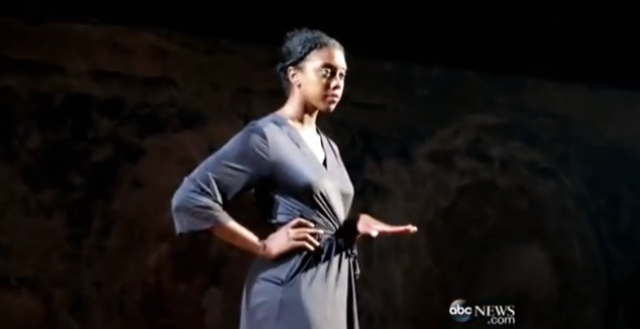 On Sept. 27, ABC News named William Shakespeare’s star-crossed lovers, Romeo and Juliet, as its Persons of the Week. Though first created more than 400 year ago, the couple remains relevant in the 21st century, especially now with a re-invigorated Broadway production that features noted film actor Orlando Bloom as Romeo and CalArts’ alumna Condola Rashad (Theater BFA 08) as Juliet.

The ABC report also singled out Rashad for helping break down a barrier—by becoming the first Black woman to play Juliet on Broadway. This is the first interracial staging of Romeo and Juliet, and the production team decided to make it a visible part of the story. “We don’t hammer it in. We also don’t ignore it.” Rashad told ABC reporter David Muir. “We just allow it to be.”

Romeo and Juliet with Bloom and Rashad currently has a limited-engagement run at the Richard Rogers Theatre in New York. For schedules and ticket information, please visit the production’s official website.

Watch the ABC report below: