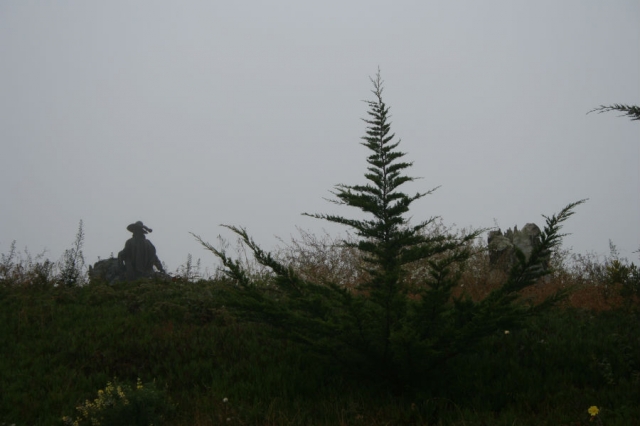 Anza in the Fog at Lake Merced, 2006. | Photograph by Jeannene Przyblyski for the Bureau of Urban Secrets

Editor’s Note: The CalArts Equity & Diversity Committee was formed to foster an open dialogue among CalArts students, faculty and staff and to address issues relating to equity and diversity on our campus and beyond. To commemorate significant holidays (such as Indigenous People’s Day, today) and other milestones throughout the year that directly relate to the committee’s work, the 24700 blog is working with several writers to bring varied voices and different perspectives to the forefront, exploring topics related to diversity and inclusion, broadly defined. In our first piece in the series, CalArts Provost Jeannene Przyblyski examines how the writing of the early history of California continues to inflect our contemporary experience.

In 2004, I was commissioned to do a project for Monument Recall: Public Memory and Public Spaces, an exhibition at SFCamerawork.  I found my topic in a controversy surrounding an equestrian statue of Juan Bautista de Anza, given to San Francisco by Mexico. Anza was a Spanish subject, born in Mexico of mixed Spanish and indigenous parentage, who in 1776 led the expedition that opened an overland route to the San Francisco Bay and established a military outpost and a mission on its shores.  The statue had stood for years on the waterfront in downtown San Francisco until reconstruction in the aftermath of the 1989 Loma Prieta earthquake necessitated its removal.

In 2001, the San Francisco Arts Commission proposed to relocate it to the median strip in front of Mission Dolores. While the Mission welcomed it as a “talking point,” neighborhood anti-gentrification activists ultimately blocked its installation, seeing Anza as emblematic of a first wave of genocidal displacement that was finding new and insidious momentum in recent gentrification pressures fueled by the dot.com boom. At the time I began work, Anza languished in storage on the fringes of the city, much to the frustration of preservationists of the Mexican heritage of early California, including those who traced their ancestry back to the Anza expedition. Travels with Carlos and Anza: a Brief History of a Few Missing Monuments was an attempt to psychogeographically map these complicated, intersecting narratives of encounter, displacement and erasure and to re-surface their traces in the contemporary landscape.

The research for that project led me into the archives and onto the road.  In the archives, I found detailed diaries by Anza and Fray Pedro Font, as well as accounts by leaders of previous expeditions, and the wealth of administrative documentation that greased the wheels of the colonial missions of both the Spanish Royal Court and the Roman Catholic Church.  The viewpoint of the native peoples the expedition encountered along the way was not so easy to recover.  A practice of history that privileges the written archives alone risks relegating oral cultures largely to silence.

On the road, I retraced Anza’s route from Sonora, Mexico, through Los Angeles to San Francisco. When Anza followed the rough trails connecting native village to village, he encountered no resistance and had his people under strict orders to neither molest nor steal from the villagers (and what would become “California” was one of the most densely populated regions of North America prior to European contact). When I traveled the highways of Southern Arizona and California that now overlaid these trails, I encountered multiple border control checkpoints and stops, uniformed officers peering into my vehicle before waving me on. A practice of history that ignores the contingency of narratives and the tenacity of power relationships that mark the ownership of land and the right to occupy it risks re-inscribing those conditions without question.

The Anza monument ultimately found a place on the shores of Lake Merced where the expedition had made encampment in 1776, an anti-climactic end to a story that we continue to live.  The work of understanding the legacy of conquest and the complexity of cross cultural contact continues as a global economy of labor and capital creates new pressures on the relationships between those who are designated as residents, citizens, newcomers, immigrants and exiles. This is one of the things we try to reflect upon on when we contest the dominant narrative of “Columbus Day” with the designation of  “Indigenous Peoples Day,” and it is unfinished business indeed.