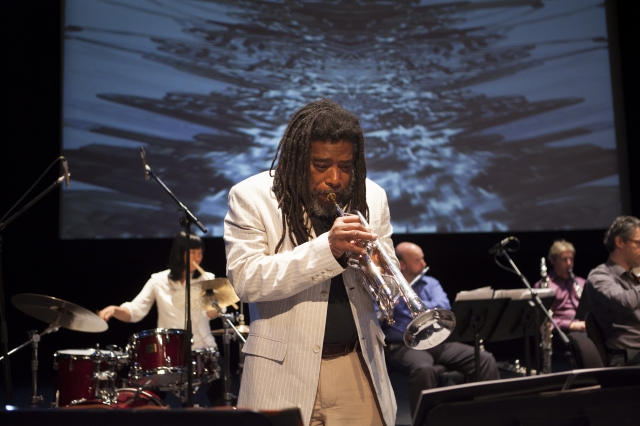 Composer, trumpet master, multi-instrumentalist and CalArts faculty member Wadada Leo Smith retires from The Herb Alpert School of Music at CalArts in May after 20 years of teaching. On Wednesday (Oct. 23), his retirement celebration commences with a special noon concert in the Main Gallery at CalArts. The show features new excerpts from his Ten Freedom Summers Collection, a work that earned him a finalist spot for the 2013 Pulitzer Prize in Music. The free event showcases his lauded Golden Quartet, the Pacifica Red Coral ensemble and video by former faculty member Jesse Gilbert.

The concert previews the next installment of Ten Freedom Summers titled, That Sunday Morning: Addie Mae Collins, Denise McNair, Carole Robertson and Cynthia Wesley: We Carry You In Our Hearts. The composition marks the 50th anniversary of the 16th Street Baptist Church bombing in Birmingham, Alabama. The entire collection is Smith’s tribute to the civil rights movement, honoring such heroes as Emmett Till, Rosa Parks, Medgar Evers and Dr. Martin Luther King, Jr.

In addition to his Pulitzer Prize nomination this year, Smith was recently voted DownBeat Magazine’s Composer of the Year in 2013 and also received the 2013 Jazz Journalists Association Awards for Musician of the Year and Trumpeter of the Year.

The world premiere of the complete work, That Sunday Morning, will be at the Atlas Performing Arts Center in Washington, D.C. on Oct. 25 and 26.