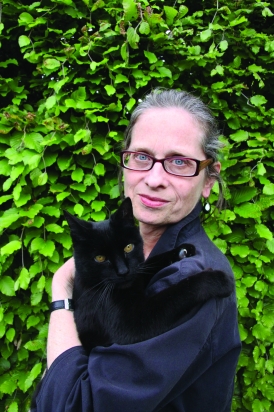 A new CalArts writer-in-residence program begins the week of Nov. 11, when the award-winning short story writer Lydia Davis visits the campus for lectures and meetings with graduate creative writing students in the School of Critical Studies. Davis, a 2003 recipient of the coveted MacArthur Fellowship and the 2013 winner of the Man Booker International Prize, will also give a public reading at REDCAT.

The Katie Jacobson Writer-in-Residence program, an annual residency in the MFA Creative Writing Program, is named after Katie Jacobson (MFA Creative Writing 10), who passed away last October, and was created thanks to generous support from her parents, Leslie Jacobson and Jeanine Caltagirone. “We agreed that we needed to initiate something to carry on the writing Katie did and carry on her name,” said Caltagirone. And they decided that the tribute should be at CalArts, where Jacobson spent two productive years, honing her craft.

“We are extremely grateful to the Jacobson family for this wonderful donation to our Creative Writing Program,” said Amanda Beech, dean of the School of Critical Studies. “Their generosity means that our students will benefit from intensive and one-to-one interaction with internationally-renowned writers, enriching the creative life of the community at CalArts in immeasurable ways.”

Jacobson came to CalArts in 2008 after receiving her bachelor’s degree from Occidental College in 2007. According to Janet Sarbanes, chair of CalArts’ MFA Creative Writing Program, Jacobson was “very bright and a pleasure to talk to. Her writing was quirky, original, thoughtful and darkly humorous.”

“We chose Lydia Davis to inaugurate the program because of her experimental impulse—having basically invented her own form of fiction, the very-short short story,” Sarbanes says. “She’s a great person to bring into an innovative writing program like ours and a terrific model for our students because we encourage them to pursue their own vision and develop new forms of writing. She also has a multi-dimensional practice, which is something else we advocate in our interdisciplinary setting. In addition to being a world-renowned and prize-winning author, she’s also a celebrated translator of Proust, Flaubert and others. And finally, her absurdist sensibility and minimalist aesthetic puts us in mind of Katie—we think she would have enjoyed Davis’ visit very much.”

The Jacobson residency comes a few months after one was established in the School of Critical Studies’ Master’s Program in Aesthetics and Politics for a theorist in residence. Sarbanes adds that the new program also helps to “raise awareness of our unique, interdisciplinary creative writing program among the general public.”

Davis, a professor at the State University of New York at Albany, will conduct a public lecture on the tradition of absurdist literature on Nov. 12 at 7 pm in Butler Building #4 as part of Critical Studies’ Interventions Lecture Series. On Nov. 13 at REDCAT in downtown Los Angeles at 8:30 pm, she will read from her work and answer audience questions. “We’re hoping that this residency goes on for years,” Caltagirone says. “Maybe some young writer will attend the CalArts program, or develop his or her work, and go on to realize a dream.”