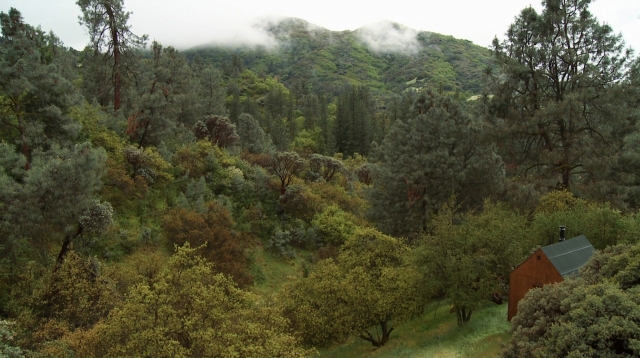 Filmmaker and faculty member of the CalArts School of Film/Video James Benning screens Stemple Pass, a meditative 121-minute film about Ted Kaczynski, the domestic terrorist dubbed “the Unabomber,” who’s serving a life sentence in a super-maximum security facility in Colorado. In the High Sierras in California, Benning built a replica of Kaczynski’s hermit cabin in Montana and filmed the cabin over four seasons starting with spring. Interspersed with the chirping and flight of birds and the wind rustling the trees is Benning’s voice reading excerpts from Kaczynski’s number-coded journals—decoded by Benning in 2011—the infamous Unabomber Manifesto Kaczynski published anonymously in The New York Times and Washington Post as well as a 2011 prison interview. Described by Variety as “cumulatively stunning,” Stemple Pass explores environmentalism and technology through the psyche of a man waging a one-man war against machine culture.

Oaxaca-based contemporary artist Edgardo Aragón will screen his two films Efectos De Familia and La Encomienda. The first film consists of 13 segments of children re-enacting violent episodes in play and La Encomienda frames a group of men through the opening of an abandoned mine shaft singing mining protest songs from different Latin American countries. Aragón, known for photography and video that focuses on the arid and open landscape of Mexico, uses these two films to explore the violence in the region and the effects of foreign companies’ exploitation of the land for economic gains.

The gallery’s press release states that Benning and Aragón share the space for works that “restage personal and collective histories that deal with violence and darkness in the political sense,” and for the fact that “revolutionary discourse and the rupture of cycles that deal with power both seem distant and ever-present in all the works.”

There will be an opening reception for Edgardo Aragón & James Benning tonight and the show will run through Nov. 10.