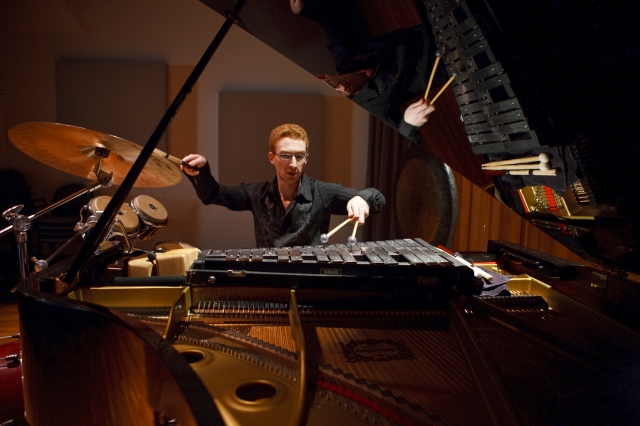 Pianist/percussionist and faculty member Danny Holt (Music MFA 06) has spent much of the last 10 years perfecting his Piano/Percussion Project: a collection of more than 20 pieces that places Holt at a piano among an array of percussion instruments. On Sunday at 5 pm in The Wild Beast at CalArts, Holt performs new works for his unique multi-instrumental setup that shows off his ability to multi-task. The performance, which includes chamber accompaniment, will also be filmed as part of a new documentary film about Holt’s work.

Sunday’s concert features solo piano/percussion works by composers and CalArts faculty Ulrich Krieger and David Johnson as well as alumnus Milen Kirov. More about the concert in an email from Holt:

Johnson’s Antar’s Revenge–inspired by a 6th century Arab poet/warrior–extends the piano with bells, cymbals, and other metallic sounds, creating swirls of exotic colors. Aegri Somnia, by Kirov, is a groovy setting of Bulgarian folk music for piano and drums. Krieger’s Oberfläche (receiving its world premiere performance) paints a mesmerizing picture of the surface of the open ocean.

Holt says that Krieger’s new work expands the resonance of the Wild Beast’s Yamaha 9-foot piano by using cymbals, tam tam, glockenspiel, among other instruments—all while the piano’s sustain pedal is pressed throughout the piece. Much of the composition is unplayable according to Holt, with 12-15 layers of music happening simultaneously at times. As a result, Holt is forced to make creative decisions on how to realize the score.

The concert will be filmed by documentary filmmaker Harry Bromley-Davenport. Holt met Bromley-Davenport on the set of the director’s recently released documentary, American Grand, which featured CalArts’ piano technician Alan Eder, among other piano tech stars. Shortly after, Holt and Bromley-Davenport, along with pianist Steven Vanhauwaert, collaborated on a music video for a piano duo version of Igor Stravinky’s Rite of String. Then, Bromley-Davenport, who has a strong interest in pianos and their inner workings, asked Holt if he could make a documentary of his work.

“Performing with this setup has caused me to reinvent how I play piano and how I learn a new piece,” says Holt. “Practicing is especially intense and involves a lot of very careful, often tedious work as I negotiate the complex choreography of piano, percussion, foot pedals, mallets, page turns, etc. Plus, I have to put up with the chaos of percussion instruments strewn over much of my living and dining rooms.”

Below, Holt performs excerpts from Andrew Tholl’s (Music DMA 12, MFA 08) hitting things won’t solve your problems (but it might make you feel better):