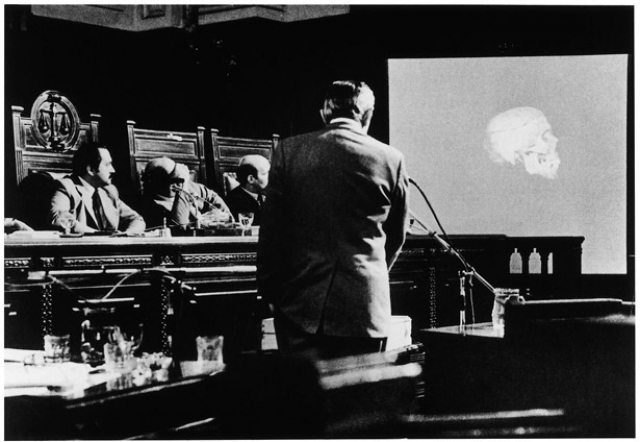 Clyde Snow presents a slide of the skull of Liliana Pereyra, in the 1985 trial of members of the Argentine junta for crimes committed in the ‘dirty war’ (1976–1983).

Eyal Weizman, architect, professor of Spatial and Visual Cultures, and director of the Centre for Research Architecture at Goldsmiths, University of London, lectures about forensic architecture—a highly specialized field that involves analyzing buildings for structural and design failures—titled Forensis at REDCAT on Thursday (Oct. 31).

Architecture is employed as a field of knowledge and as a mode of interpretation, one not only concerned with buildings but rather with an ever-changing set of relations between people and things across multiple scales… The courts in which forensics is asked to perform embody, of course, the logic of the states that established them. But forensis could become a counter hegemonic practice that could invert the relation between individuals and states, helping to challenge state and corporate violence and the tyranny of their truth.

Below is a video of Weizman explaining forensic architecture and his research.