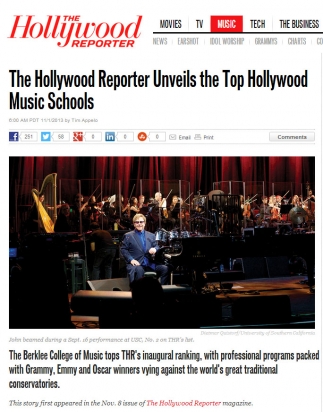 The Hollywood Reporter ranks CalArts as one of top ten music schools.

Today (Nov. 1), The Hollywood Reporter released its inaugural rankings of top music schools, “both traditional conservatories and innovative programs that funnel talent to Hollywood.” As with their film school rankings released four month ago, the magazine places CalArts in good company, ranking The Herb Alpert School of Music at CalArts ninth in a list that includes institutions such as Boston’s Berklee College of Music and New York’s The Juilliard School.

Herb Alpert called CalArts’ music school “a really honest, creative place entirely open to new ideas.” And the music industry veteran and jazz aficionado put his money where his mouth is, gifting $15 million for The Herb Alpert School of Music at CalArts (not to be confused with UCLA’s). The program gives each student an industry mentor, restricts class size to an average of 14 and provides access to talented alums who tend to settle nearby.

The rankings are based on a survey of academic and entertainment insiders—including composers, arrangers, music supervisors, editors and engineers from The Society of Composers & Lyricists.

Below is the complete list of schools by ranking: