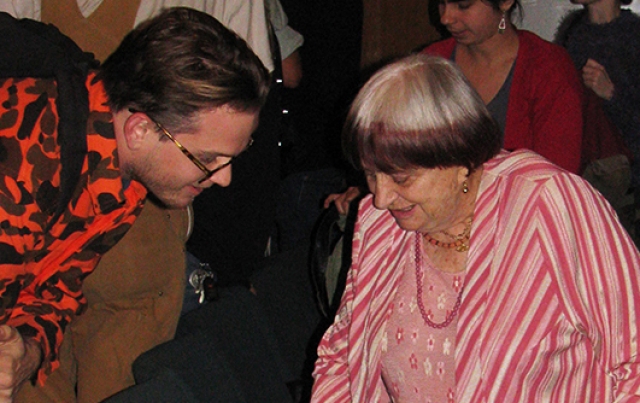 Agnès Varda with a student at CalArts. | Photo: Stuart Frolick

On Friday evening, November 1, School of Film/Video faculty Thom Andersen and Bérénice Reynaud welcomed honored guest, Agnes Varda to their Film Today class. The Belgian-born artist and filmmaker was greeted by a warm, standing ovation by the audience that packed the Bijou theater. Following Andersen’s introduction, Varda noted that, “Achievement, in French, means you’re finished.” During the subsequent three hours, the legendary director made it clear that, at 85, she is hardly “finished.” She began her presentation by asking, “How many of you have seen one of my films? How many have seen two? How many have seen three?” Satisfied that she was in the company of those in the know, Varda proceeded to discuss her work, seriously and humorously, through personal anecdotes and answers to student and faculty questions fielded between screened excerpts of her films.

Varda made her first film in 35-mm black-and-white in 1954. Her work has been linked both to the French New Wave and Left Bank cinema movements and includes short subjects, narrative features and documentaries. Her best-known films include: La Pointe Courte (1955); Cleo from 5 to 7; Vagabond (1985); Jacquot de Nantes (1991) about the life and work of her husband of 28 years, the late film director Jacques Demy; The Gleaners and I (2000); and The Beaches of Agnes (2008). Among her many awards, Varda received the Golden Lion of the Venice Film Festival in 1985, the Cesar Award for best documentary in 2009, and a Lifetime Achievement award at the Cannes Film Festival in 2010.

In Varda’s remarks at CalArts, a few themes emerged: She spoke about a lifelong concern for the homeless. “I’ve always been impressed with homeless people,” she said. “It’s a terrible thing not to have a roof over your head…” Of shooting documentaries, she said, “I have never resolved the question: Does it help the subjects somehow? Does it make people aware of the problem?” Varda also spoke of finding the “shape of a film” in the process of editing; of “giving a film shape and meaning; a reason, a tune, a color.”

As a college student Varda studied art history at the École du Louvre, and currently she creates installations exhibited throughout the world. “I love art more than anything,” she said. “It is a privilege to be an artist; to be curious; to see people…Art is for everyone to feel something–just feelings without explanation–I like that.”